Steve Marlette was the only Ag3r rider who faced the ELEMENTS* to race the Raccoon Firehall CX.

* - Steve primarily braved the elements of WIND and WATER (eg: snow & ice!). He had brief encounters with EARTH, who was kept hidden by WATER most of the time, except in one portion of the course when it COMBINED with WATER to mascarade as MUD....or maybe as a Mochachino!  EARTH did, however, play a SOLID Best Supporting Actor role as a foundation for WATER, when together they resisted the impacts of falling riders! On the other hand, Steve did not have to brave FIRE, who was unavailable for comment, but would have been welcomed with open arms by all riders! TEMPERATURE, despite significant efforts to lobby on it's own behalf, has not yet been granted ELEMENTAL STATUS.
-----------------------
Thanks to Jeff Curry, Michael Appel, and Mike Briggs for their images!  They are as brave, they are as tough, and they are as stupid as the riders!   Jealous :)
----------------------- 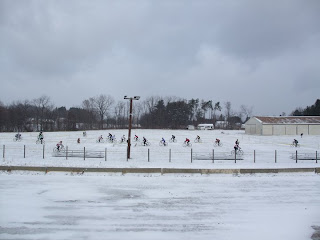 I wore legwarmers and tights. I wore an old set of ski gloves that I could barely shift in (this was the correct move, otherwise I would not have been able to feel my hands by the second lap). I wore nearly everything in the Ag3r kit to stay warm.

Staying warm and upright were the key to this race. 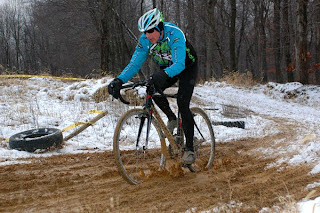 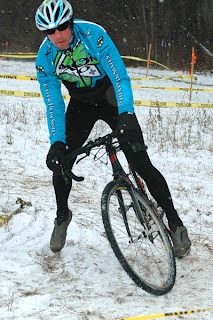 I moved up two places because the guys in front of me fell. 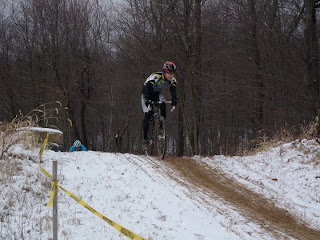 I later reciprocated by falling on the last lap and they passed me. 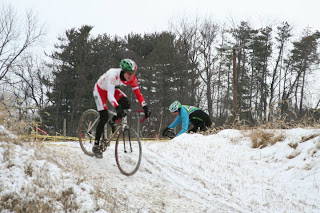 A fun race!..but as cold as I ever want to race again.
Posted by Henry Dimmick