On Friday Night, Dirty Mike held his Annual Double Cross Race Party.  Attending this 2-Race event (Race #1 at DUSK.  Race #2 in the DARK of Night!) were Mike Maher, Brian Hopkins, Ray Sileski, Kirk Morrison, Mark Briercheck, Henry Dimmick, and Jim Miller.  With the party wrapping up at ~midnight, Kirk and Mike began readying themselves to race CX in Ohio the following day!  That would make THREE races in two days.

HardCore?  ...or Stupid?!
You be the judge...after you read that they actually raced FOUR times :)

The weather was perfect for this 4th edition with partly sunny skies and temps in the low 70’s. This was a fairly fast course with lots of grass, a paved section, one long climb and practically no mud or sand.

In the noon race I competed in the SS Open class, while Mike raced in the Masters 45+ Cat3/4 event.

Afterwards, we both raced in the 1:15pm Cat3/4 Open race. Unfortunately, our legs began to feel the effects of being called to perform in their 4th race in less than 24 hours (with about 3 hours of sleep for Mike !). After a quick start we found ourselves a bit “off the back”. 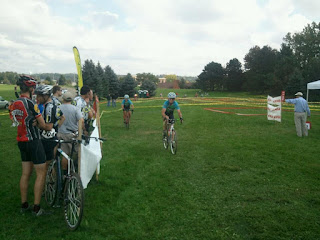 Photo by Jeff Gernert
Mike and I rode most of this race together until he couldn’t take being passed by another 1/2/3 woman (they started a minute behind us) and he rallied for a strong finish. Photo by Jeff Gernert
Meanwhile, I was content to cheer on the fast gals as they cruised by! 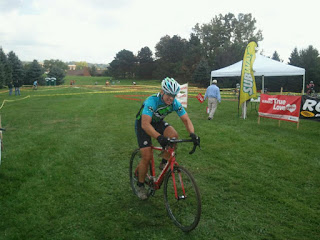