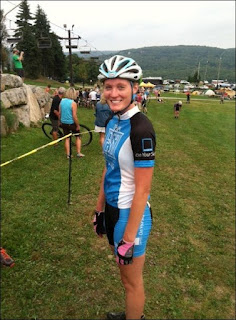 Last weekend I competed in my first, and not last, 24 hour race.

Undoubtedly the only reason I agreed to do this race was because I didn't have time to think about it. Any rational thought would have reminded me that I have never ridden in the woods at night, haven't been camping since I was 16, and prefer to be in bed by 9PM on weekends. I wasn't prepared for this, but since I have this eccentric gene that makes me do reckless things, I said yes. The ESI teammies were so accommodating already that I assumed I would be in good hands.  The boys agreed that I didn't have to do any night laps, and that they would only expect me to do the 2 minimum laps required per rider. So, I was IN.

I started packing and talking to Ag3r teammates Henry Dimmick and Mike Maher about "what to expect" and "what to pack." Both were extremely helpful; Henry made sure I had everything I needed for the weekend, and yes, Henry thinks about EVERYTHING. Mike took Steven (Brewer) and I out to pre-ride the course and talked me into doing a night lap. Yes, I am stupid enough to accept (and often agree with) Mike's advice. I went back and told my ESI teammates that I was prepared for night laps. (Lie: I wasn't prepared, I just wanted to do one!)

I was the first to ride for our 5-person co-ed team. The run around the lake was just as everyone said it would be: sucky (and too long to run in MTB cleats). I felt great on both the run and the ride of my first lap. The course was dry, and completely ride-able. My lap time + run time was 1:37:07. I was pleased with my time since the course was almost 14 miles. We were in third after the first lap, but not bad considering no other co-ed teams had sent their girl out yet!

The ESI boys all rode very well, despite one flat and one stripped pedal. We quickly moved into 1st place, and all worked hard to keep our nice lead.

My second lap started at 7:45PM, so my lights were ready and I did 80% of this lap in the dark. Unfortunately, it POURED for this lap. The rain was so heavy it was hard to see because of the fog coming off of my light. I blindly bombed down hills with no care in the world and tried to stay focused on the trail in front of me. Who talked me into night laps again?!?!?  I finished my first night lap in 1:49:13. I felt great crossing the finish line. Nothing is more empowering than riding alone through the dark rainy woods with nothing but your bike, your light, and a prayer that they won't let you down!

I washed up as best as I could, and got in my partially damp tent for a much needed 3 hours of sleep. The ESI guys tuned up my bike between laps and made sure my lights were ready to go. Anita and Tracey, ESI wives/girlfriends/support crew made grilled chicken, pancakes, rice, and anything else we needed to stay fueled. Thanks to these ladies, camping wasn't so bad after all!

I woke up in the dark for my 3rd and final lap, and made my way to the transition zone. Josh, one of the ESI riders was surprised to see me up and said "you don't have to do another night lap." But I was ready to ride! I was tired and disoriented, but energized since this would be my last lap and because the sun would be coming up at some point during my ride. The sunrise lap really is the best lap, even on a cloudy day. The course was a mudfest, and actually the mud was thicker and slicker than it was during the torrential downpours I rode in 5 hours ago. I finished this lap in 1:53:06.

Overall, I was pleased with my lap times, and enjoyed riding and being part of this exciting event. The best part of the day was when the rider that finished next to me on the first lap said "boy, you really have a lot of people cheering for you!!" And he was right. The support from the crowd and other riders was motivating and appreciated. 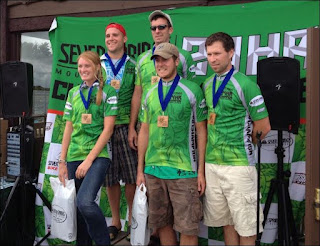 We got a champion jersey, medal, hooded green Seven Springs sweatshirt, and some other bike-related goodies.

Its great to know that I have friends outside of my Ag3r teammates that I can depend on and ride with.

Check out our results at:
http://allsportsevents.com/Results/mountain_bike_results/24HourChampionChallenge2012.html 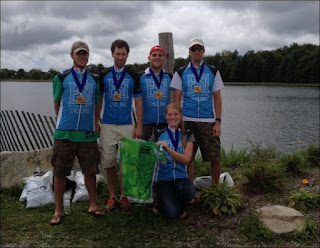 THANK YOU ESI riders for adopting me for the weekend.  And I am happy to say, I am not a runner or a triathlete, I am a mountain biker :)
Posted by Henry Dimmick