Sunday was a perfect day for racing. Fast dry trails and 70 degree temps are MTB heaven at this time of year. Logan Krause braved the 6 hour race Solo Division, with Steve and Hannah Brewer riding in the Co-Ed DUO Division.

Team Ag3r/BrewCrew got off to a rough start when Steve stripped a hub on his first lap. While he was hiking the bike, another Butler rider saw his dilemma and kindly took the time at the transition zone to inform me that Steve was "off of his bike." I was given permission by the race officials to ride out to meet Steve to get his chip, finish his lap, and begin my first lap. As I was backtracking (half on/half off of the course) as to not get in the way of the racers, "Double Muff" picked up speed and coasted into the finish line, missing me and leaving him at the transition zone with no partner.........

Photo by Mike Briggs
So, Double Muff did Double Laps(!), as I waited impatiently in the transition zone.
Finally, things got back to normal.
Steve came through on his 2nd lap, and I headed out for our 3rd lap. 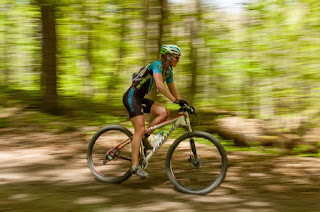 Photo by Mike Briggs
After Lap 3, I decided to double up and go straight out for our 4th lap since I was either going to have to double up then or later. Steve rode/ran laps 1 and 2, I rode laps 3 and 4, and Steve rode lap 5. We FINALLY started to ride consistently, putting in 54-58 minute laps.
My 3rd (and last) lap was my favorite lap of the day. I finally felt comfortable on the trails, and rode smoother than I did on my first two laps – if only I had fresh legs! 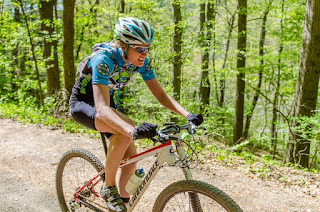 Photo by Mike Briggs
Since we were so far behind at the start, we assumed we would each only get three laps in. Unexpectantly, we finished in time for Steve to put in a 4th lap. At this point, he had had enough of the rigid-fork single speed and took my 29er out for his 4th, and our 7th/final lap. 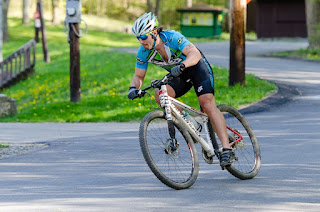 Photo by Mike Briggs
After a long and chaotic day, we finished in 5th place in the Co-Ed DUO category. Not too bad for starting out DFL. And for the record, it is way more fun to play "catch-up” at the bar than it is at a mountain bike race :)
While driving home after the race, I declared that I was done doing 6 hour races. Steve agreed. This morning, all it took was one cup of coffee and I was already Google-ing 6 Hours of Power!
Results from our long but fun day can be found at:
http://www.smileymiles.com/2013/RES13%20BRADY%27S%20RUN%206%20HR%20MTN%20BIKE%20LAP%20RACE%20DUO%20CO-ED%20OA.HTM
Teammate Logan rode strong as a Solo rider, finishing four fast laps. 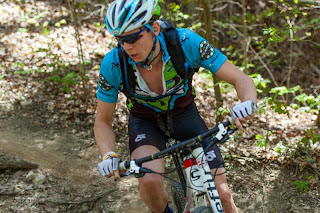 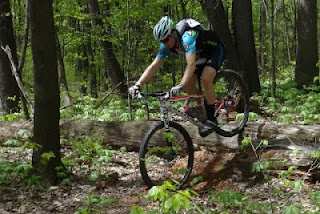 Photo by Tim Marsh
Thanks to LOGAN’S DAD for holding down the fort while the riders were out – and for providing water and the moral support that EVERY participant in an endurance race needs between laps.
-- Story by Hannah
Posted by Henry Dimmick