With a bit of trepidation and reservation, I elected to attempt this year’s edition of the Fearsome Five. 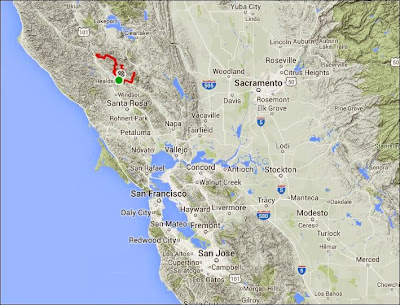 Yesterday’s ride was somewhat of a whim, as the trials and tribulations of life’s challenges have kept me off the bike for extended periods of time. However, while stuffing drop bags at the Wohler bridge RS on Saturday, I was inspired to join the FF by a few close friends and the grand marshal himself!

I knew I would need an early bird start in order to finish, so arrived at 6:30am to what was announced as a meanderful pace. I settled in for a comfortable first South Geysers climb in the moist and cool marine layer. While many of my "friends" applied the pressure on this first climb, I remained calm, knowing there was so much more to come!

Temperatures in Sulfur Canyon were downright frigid. After helping someone change a flat, I came upon a portable and fully equipped Rest Stop at the bottom of Pine Mountain (climb #2), set up in the back of the organizer's truck.

The Marine layer was still holding, so this climb was also very cool. I was harassed by 2 hard-charging canines a couple of miles from summit. After quick descent and a 2nd refuel, we reversed course to scale Geysers from the north. 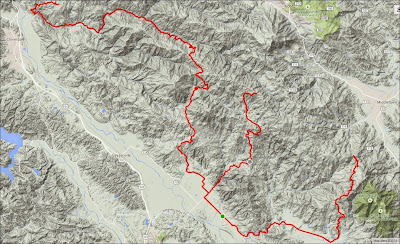 Late morning, the sun finally broke through and started to bake the roads and slowly heat the guardrails, which groaned as they expanded. The descent down south Geysers is among my favorites, with sweeping turns and stunning views of the Alexander valley vineyards below.

After lunch stop, I continued on into gusty headwinds headed S. on 128. My legs were getting quite exhausted as I made the turn onto Ida Clayton. The first 4 mi of this climb are quite steep and continued to sap my remaining strength, so I just tried to hand on to the turnaround point at Western Mines Rd.

After stretching my cramped legs at the top, I caught a second wind as we pace lined N. on 128 back to the school with a decent tailwind.  At the school, I felt somewhat recovered and strong enough to conquer the Pine Flat climb.

Approaching the wall was intimating as ever, as my legs were completely shot. I figured I would crawl up the wall if I had to. As I hit the steep 20% grade, I starting pedaling squares, rocking back and forth to use my body weight to keep forward momentum. I took this climb well beyond my pain threshold, as there was no stopping me now! Halfway up the steep, I could hear some friends shouting encouragement as I slowly approached. Upon reaching the top, I felt a sense of deep accomplishment.

At the summit we stood in wonderment, while we gazed down onto the stunningly beautiful world below, spent a few poignant moments reflecting on the day’s suffering (mind over body), pondering the ups and downs of life’s challenges, and underscored the importance of living in the moment and counting your blessings.

The summit is the official end of the day’s suffering, with the descent down Pine Flat a mere victory lap basking in the glory of our deeds. However, my victory lap was abruptly cut short by a very sharp rock which slashed the sidewall of my rear Gatorskin hardcase. Our makeshift repair only held up for 3 miles, so my friend MarC, the consummate ride leader host, returned up the mountain with his truck to retrieve one tired and cold man.

Thanks to all for giving me the strength to complete this suffer fest!