Steve Brewer hitched a ride from Indiana, Pa. to the Allegheny Cycling Association Wednesday Night Criterium....and as it turns out, was glad he had a driver for the trip home.

After successfully making it into a 10-man breakaway, just as the break group came out of Turn #4 heading for the finish, another rider had a mechanical malfunction that caused him to veer right into Steve, crashing them both completely OUT.

Steve's jersey was torn, his helmet was smashed, his bike saddle rails were broken... 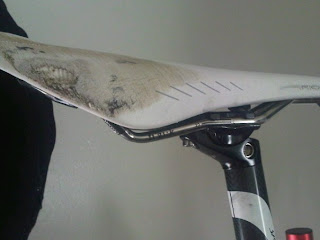 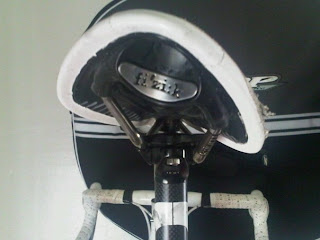 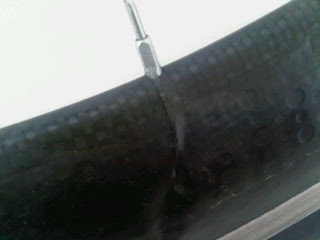 ...and ultimatley Steve needed stiches to his
"achilles webbing" ...to close a tear in the skin big enough that you could see his achilles tendon. (See for yourself!)

While (all of us not there) were worried ...Steve soon began FaceBook posting from the hospital ...so we all knew he was "mostly" OK...!  Ain't technology great?!!

PS -
They also did a CAT Scan on Steve (since his helmet was broken) ...and found that he DOES in fact have a brain!
Mystery solved  :)

PSS -
Mark Briercheck was there too ...pulling up when the main group came upon Steve after the crash.

PSS -
Thanks to Mark Nichol for looking after Steve.

--------------------------------
Mark Briercheck's FIRST HAND story:
Steve Brewer and I headed down for the weekly Wednesday nighter (7/13/11) A Criterium at the Oval. Our original goal was to set the one lap mass start record by me leading out Brewer and then Brewer firing the after burners on his awesome sprint. Unfortunatley, due to our mis-understanding of the officiating, we found out the officials weren't quite prepared to check records for each lap. So we scrapped the record setting idea for the night and just decided to focus on the race.

The A race was a decent sized group with 35+ riders in the field. The pace started fast and stayed fast for most of the 55 lap race. Brewer and I kept tabs on each other taking turns staying towards the front and watching the breaks. A number of opportunities arose during the evening for breakaways (as both Steve and I each got into at least two solid escapes)...yet the strength of the field was showing its form and reeled it back every break.

With one lap to go Brewer was positioned towards the front of the field and I had started to drift back to watch Steve win it all. Then, after rounding turn number 4 just as Brewer had full clearance and a clean line of sight to the line....

I see Brewer and one other rider in red go down hard. I sprinted over to see Steve lying on the ground not moving. Bob Gotlieb is the other guy who went down. After a few moments Steve started to move around and just had the look of "What happened?".  Turns out that Gotlieb broke something on his drive train and just went straight down. As a result he hit Brewer from the side.

As Steve stood up and looked around lots of people pointed out that he's bleeding a lot. His response: "Is my bike ok?"

After a quick trip to the ER and hopefully only minor bike repairs - Brewer will be back in action.
Posted by Henry Dimmick