...and guess what?  YUP. You guessed it, Steve had a mechanical during the race...AGAIN!!!

------------------
Kirk tells HIS side of the story like THIS:
I joined Hannah and Steve Brewer at the Snakebite NEOCX race #2 in Cascade Park, Ohio. The weather was much cooler for this second edition of the Series with temps in the high 70’s. This was a fairly fast course with lots of grass, a paved section, two climbs, and NO SAND!!!

However, the MUD BOG was almost a foot deep which made it pretty much unrideable (as I demonstrated by trying to ride it ....... several times... 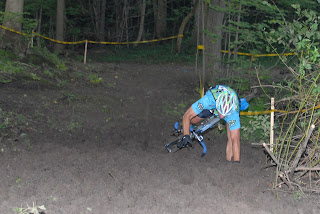 Photo by Gregg Brekke
To add further insult to injury, my photo appeared publicly on the NEOCX site HERE:

In the first lap of the SS race, I met rider in front of me as he was running back into the mud bog to retrieve (as in “dig out”) his shoe which the mud had claimed for its own.

Hannah took top honors for the day from our group with a 5th Place finish in the Womens Open Race. 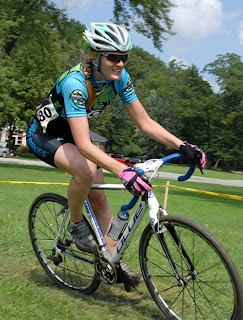 Photo by Gregg Brekke
Steve was on his way to a top 2 finish in the Cat3/4 Open race when he had the misfortune of a flat front tire. Unfortunately, Steve was snakebit again as the front wheel that he borrowed to get back in the race flatted too (which ended his racing day)...DNF. 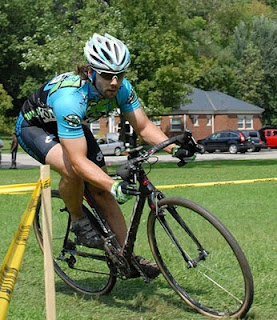 Below is a link to the results page.
www.snakebiteracing.com/Newsletter/CascadeCrossResults.pdf\

The weather took a drastic turn midway through the subsequent Cat1/2/3 race when a thunderstorm hit with heavy rain, wind and lightning.

While we were envious of the chance to ride in the “new mud” created by these conditions, this race ended about 15 minutes early as a result of the lighning.