Here is the new System6 Rich got in today. It is equipted with full Ultegra and Mavic wheels, and it's in my size. It is one pretty bike
Posted by Unknown No comments:

Well to say that August was a boring month would be an understatement. Not paying attention to the warning signs I continued to ride and train during the entire month. I also competed in 2 races, Ole bull Midnight Madness, which is a 12 hour Mounting Bike Race of which I completed approximately 6 hours of due to outlandishly poor conditions, bike malfuntions and feeling poorly. The second was the Seven Springs / Subaru 24 Hour Challenge. This is the one that did me in. Again I was already sick and had been for almost a month. This weekend adventure started for me at about 0700 am. On Saturday Laborday weekend and ending ending around 1700 on Sunday. Despite my physical condition I was very excited about the race. Even though the weather was not good. Conditions didn't matter though, This race is always a blast and I couldn't wait to get started. The race itself was really a lot of fun even thought the conditions got worse as the day progressed. As told by the previous Blog by Brian. Now this is where the 7 days in the Hospital come into play and is probably due to several reasons. Already being sick, continuing to train while I was sick, Racing while I was sick and staying up for 34 hours all lead to the depletion of my immune system. During the 24 hour race I developed a slight abrasion on the inside of my leg and a slight saddle sore, neither of which through up red flags to me. The next day,Monday, I started running a high fever which by Tuesday reached the High of 104 which landed me in the local Emergency room. They're diagnosis was the common flu, take 2 aspirin and take it easy for a few days. Still the abrasion and saddle sore weren't of any concern. Wednesday was a different story though, the abrasion started looking funny and redness started creeping down my leg and by Thursday I had swelling the size aof a baseball on the inside of my thigh and the redness continued down my leg. This fever was also persistent. By Friday I could not take it anymore my condition was deteriorating and I went to se my family Physician who imediatly started me on antibiotics, with the instructions to keep a close watch on things. By Sunday the infection had consumed my entire leg to my knee which meant a speedy trip to the Hospital. The following week in a nutshell. Sunday = Admitted to the Hosopital with a possible Staff infection. 24/7 of the stongest vein bunrning antibiotics they could dish out. Monday = verification of staff infection 103 temp on Monday evening. Tuesday = More Vein burning antibiotics and the ifection seems to be responding. Wednesday = Surgery and still receiving antibiotics Thursday through Saturday = More of the same changing my IV line every other day. Released on Saturday afternoon. One more week of oral antibiotics and recovery. And at least another month off the bike. All I can say is be careful.
Posted by Rich No comments: 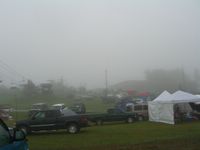 The Subaru 24hour Champion Challenge was this weekend. It was cold, rainy and muddy. It was also a blast. Now don't get me wrong this was a different kind of fun. It wasn't the laughing/smiling kind of fun. It was the kind of fun that you have when you are so miserable and sleep deprived that everything seems hilarious. My day started at 0730 when I woke up and looked outside to see a downpour that was the remnants of hurricane Ernesto. Then I got my car packed, ate breakfast and headed out to meet Rich and go to Seven Springs. When I was sitting at the gas station waiting I got a phone call from Rich saying that he would be late because his camper tires were low and he hadn't noticed until the last minute. He finally got there and met me at 9:10 and we were off. We arrived at the race venue at 10:30 and immediately started to set up camp. By this time the rain had slowed to a mist but the field where we were setting up had so much water laying on it that my feet were completely soaked by the time we were done setting up. From there I went to the pre-race meeting and to pick up our band that we had to pass between riders at the beginning and end of laps. Nick was volunteered to go first so now it was time for him to head to the start finish line. He headed out at noon and Rich, Mark, and I were still working on setting up camp. About an hour later we all went up to the transition area to see Nick finish his lap and see just how fast (or slow) the course would be. It was truly unbelievable when Tinker came through second. Here this guy is doing a 24-hour solo and he beats our guy by almost 15 minutes. I was second in the rotation, so now it was time for me to head out. I was expected to be the slow guy in our team so there wasn't too much pressure on me. Good thing because I got a flat less than 2 miles into my lap. I finished in 1 hr, 38 minutes. Not a great time by any stretch of the imagination but it was only about 15 minutes slower than Nick and with the flat added in, I was happy with the time. Rich was up next and he did his lap and came back and reported the trail conditions were getting worse and worse all the time. With this Mark was off to complete his first lap. When Mark came back he told us the same thing as Rich that the trail conditions were awful. Nick was off next for what would be the last day lap. I was up next and I got the privilege of passing Mike who had been riding for over 7 hours at that point and was feeling really sick. This was my first night ride ever and I was almost blind with the fog. My lap time went from 1 hr, 38 min for the first lap to a 1 hr 58 min for the night lap. That was the beginning and end of my night riding experience. I decided I was done for the night because my MTB skills and lack of light could end up getting me killed. Rich went out next and did his night lap and said by that time the fog had died a little after you dropped off of the top of the mountain. Mark said he would do the next two laps so that he could get some sleep before his last lap of the day. I took Mark another bottle and a few gels between laps. Nick went out next for his night lap and then Rich went out for his second night lap. I went out after Rich for what would be my last lap. My goal was to go under 2 hours but that was in doubt when I was less than 4 miles into the lap and felt like I was on the verge of bonking and I had no food and only a small bottle of energy drink. It was slow going but it was looking like I was going to make it. Then when I got close to the finish and realized what time it was my new goal was to finish before 10 o'clock so I could get pancakes at the lodge. I finished my lap at 10:03 a measly 3 minutes too late so no pancakes for me. Mark went out after me for our last lap. When I got back to camp Rich had already started to tear down camp. I had something to eat and then I started to pack up as well. There are many adjectives to describe this race so here they are in no particular order: fun, muddy, cold, wet, tiring, ect.
Posted by Unknown No comments: