Job well done to all who turned out for Sunday's race.

My race report is posted on my blog.
Posted by Unknown No comments:

Mike Maher was doing Triple Duty this weekend... and doing it dirty this time, by competing in the 2009 XTERRA Trimax Off-Road Triathlon in Mifflinburg, Pa. With a 0.5 mile lake swim, a 11.5 mile mountain bike course, and a 3.9 mile trail run... Mike was concerned when he only recognized "fast guys" at the start line! Despite that concern, Mike was able to take 5th Place in 40-44 age category and 17th Place Overall. Go Dirty Mike :)
Posted by Henry Dimmick No comments:

Dave Shaffer traveled to Lancaster, Pa. to compete in a Pro/1/2/3 "east coast" road race. Unfortunately, he flatted in the first lap... and without neutal support, was forced to abandon the race. A long drive ...for nothing :(
Posted by Henry Dimmick No comments:

Rich Allen competed in The Fat Tire Challenge in Sigel, Pa. Rich competed in the 14 mile Sport Class, finishing 29th Overall, and 10th in 50+ Category. Here is Richy's Story: Did the Fat Tire Challenge in Siegel on Sunday. 100 Sport riders w/ one on a unicycle, yep Dave Crack, 35 or so Experts. Really fast group of riders this year. Sport was 15 miles with a dirt road uphill start for a mile or so then a 2 mile climb and then a 1 1/2 mile climb, 4000ft of total climbing. Lots of rocks, a couple small streams, lots of trees and 12 miles of mud. More technical then I would have thought for a race but still fun. Stayed with the main group for the first 6 miles or so, mostly single track so it was single file. Got to about 7 miles and my back started to hurt, it does this some times but if I slow down it'll usually go away, this time it didn't. Kept the back of the main group in sight for a mile or so then never saw them again. I was very disappointed that my back gave out before my legs.
Posted by Henry Dimmick No comments:

Thanks to Fred Jorden for the above image! Dave Shaffer, Mark Briercheck (above) and Sam Morrison (in lead above) competed in the Ft. Cherry Road Race in McDonald, Pa. After repeated attacks, Sam was able to finish a terrific 7th Place in the Cat 1/2/3 race. Mark and Dave finish 28th+ Sam's Story: 3 solo/ duo attacks. One with Bob Stumpf to go after a break. Lasted a couple of minutes. One with Jake Lifson (pictured on Sam's Blog) covering me as I bridged up to the break. That was hard. He just sat behind me, and I knew he wasn't going to work (because he had a teammate in the break) so I just TT'd up. Last one was (when) I thought the second to last lap was the last lap. I attacked with 3-4 miles to go and had a HUGE gap on the field, and then came around and realized I still had another whole lap to go :( I still got seventh, in the money, (but am) super shredded. Very tired.
Posted by Henry Dimmick No comments:

Brian Hopkins drove long and far into Virginia for this weekend's Individual Time Trial Championships in Stoney Creek, Va. Brian's battle with Roller Dogs lead to him have a bit of a rough ride to finish 4th Place - Cat 3 division, and 7th Place - Overall. Excellent result considering the "conditions"! You can read all about it on "The Story of Brian".
Posted by Henry Dimmick No comments:

Mike Maher competed in the Penn Trafford Triathlon in Harrison City, Pa. this past Sunday. While maybe only a local race, Mike's confidence in his new sport received a real shot in the arm by finishing: 1st Place Overall on the Long Course, and 1st Place in the 40-49 Men's Category. Just wait until he gets a tri-specific bike :)
Posted by Henry Dimmick No comments: 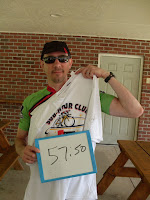 Steve Marlette also traveled East this past weekend to take part in the Carlisle 40K Individual Time Trial. Steve finished 1st Cat 5 / 12th Overall. In Steve's words: There were several firsts for me this past Sunday: First 40K TT. First TT on open roads not shut down to traffic First TT where the predominate smell was cow manure First time I had to pass Amish horse and buggy several times during the race, and First time I had to dodge fresh horse manure at 30mph! All in all, it was not too crappy :-) ...AND, I managed to qualify for a sub hour t-shirt!
Posted by Henry Dimmick No comments:

Sam Morrison competed in the Cat 3/4 Oxford Road race in Chester County, Pa. this past Saturday on his way across the state to attend the USAC Cycling Development Camp. Interestingly enough, this early SUMMER race had HAIL... contributing to a breakaway of 3 riders...with Sam finishing in 2nd Place in the final sprint. Story by Sam: 5 laps. Started slow. A couple of attacks, then it started to spit, then it started to come down hard. I moved to the front because I knew the group wasn't going to be going too fast in the rain. Then it started to hail, and the one guy attacked at the bottom of the climb. A few seconds later I went, and then another kid started to bridge. I yelled at the guy in front to wait for us, and he did. As soon as we grouped up i went to the front and hammered for a couple of minutes. It was so miserable drafting wasn't really doing anything, and you could barely see 5 feet. The roads were like rivers, I'm surprised none of us went down. On the final straight we slowed down and did the tactic thing, and I got second. Kerry Werner (2008 Worlds Qualifier) won it.
Posted by Henry Dimmick No comments:

Mark Briercheck, Dave Shaffer and Sam Morrison attended 0.7 mile, seven turn, EVENING criterium in downtown Oakmont, Pa. By the end of the Cat 1/2/3 race... Sam and his 18 yr old legs... fresh off a hard circuit race THAT morning, and an even harder Road Race the day before(!!!), was still in the hunt. Heading into the final turns, a gap in the field caused him to get caught out of the top ten. He tried to get across the gap... resulting in him (winning) the field sprint... but was unable to close down the lead group (of 11?) before the finish line. Official Results are Still Pending Watch Sam's Blog for a possible futher post.
Posted by Henry Dimmick No comments:

Dave Shaffer and Sam Morrison traveled to Youngstown, Ohio to compete in this closed course, 25 mile circuit race with one HARD power climb each of the 25 laps. While that climb ultimately took it's toll on Dave, Sam was able to stay with the lead group for a 14th Place finish. Yikes. After yesterday's Tour of Tucker County... and surviving Millcreek Park...will Sam have the legs to finish (tonight's) Riverview Gran Prix in Oakmont, Pa.? Stay tuned :)
Posted by Henry Dimmick No comments:

Sam Morrison began his 3 race weekend with a very hilly road race in West Virginia. Rolling out in the 52 mile, Cat 1/2/3 race, Sam hung with the lead group though the first two of three 7 mile long climbs, eventually falling off the lead group the final time up. This very hard race was voted one of the Top 10 hardest Road races in the USA by VeloNews. Sam was in very strong company ...finishing in 18th Place on the day. Watch Sam's Blog for a possible future post.
Posted by Henry Dimmick No comments:

June is looking like a busy month of racing for me (at least by my standards). In theory all of my races in the beginning of the month will lead me towards peaking for the PA state ITT in the last weekend of June. Today started my build upwards. I have taken the last 2 days off of my bike because I've been busy moving into my new house so today was for hard intervals. I was supposed to be doing the Thursday training TT that Yellow Breeches Racing puts on 2 Thursdays per month. It was canceled because of weather so I had to suffer solo. An hour and a half later I'm home and tired. Tomorrow will be an easier ride with just a few hard bursts to get ready for Saturday's "2009 Philadelphia Amateur Time Trial" This should be a good race, it looks like just over 200 people have signed up.
Posted by Unknown No comments:

I have seen two blog posts recently that brings an important maintenance item to my attention. One from Mr. Hopkins http://briansbikeblog.blogspot.com/2009/04/my-extended-weekend-of-riding.html and another from Sam http://samlikesbikes.blogspot.com/2009/05/what-happens-when-you-dont-work-on-your.html Often overlooked maintenance items on the bike are the cables, housings, and the handlebars. With some of the marathon indoor riding a few of you crazy people do, and the weather we all deal with here in PA, the potential damage to handle bars and cables is very real. The failure of these parts during a ride or race can be catastrophic. Some of the people from Indiana know of a rider who's sweat can eat through steel, aluminum, and carbon fiber over a winter's training sessions. So, if you can't remember the last time you unwrapped your bars and changed tape, housings, and cables, I recommend you do it soon. Once a year is not too soon. If it's been two years, you are probably over due. I happen to find enjoyment and satisfaction doing a good bar wrapping job. Happy Riding, Beachcomber
Posted by John No comments:

Craig started things off with a 1.2 mile swim, Jim then took over for a 56 mile bike, with Mark bringing it home with a 13.1 mile run.

Named team "Bob"(!) , they finished 6th Overall in the Half Marathon Relay Division.

Here is a picture of Craig and Jim, chillin' after their efforts, while Mark is still sweating out on the course!