A great start to the day! 6am bicycle ride... in the dark, on wet roads, at 35 degF, with big wet snow flakes falling. Finish with with the breaking sunrise and a double espresso.

Ride moto to work... with even bigger wet snow flakes sticking to my helmet shield, and now also the grass. 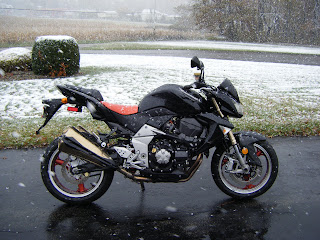 Hey everyone... Winter is coming!

Sam Morrison, talked big of taking a weekend off after clinching the 2008 W.Pa. Month of Mud Championship ...but apparently, talk is cheap! So he drove into Ohio for some CycloCross, racing the A race on a beautiful Fall Saturday. To see how things turned out, check his blog at SamLikesBikes.
Posted by Henry Dimmick No comments: 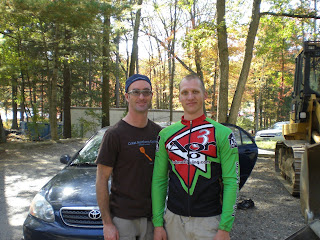 Race report posted here, I'll post results when they're posted but it's not gonna be pretty.
Posted by Unknown No comments:

Sunday also found Ag3r racers on the west side of the state competing in Race #4/4 of the Western Pennsylvania Mountain Bike Racing Association's Month of Mud (MOM) Series at Moraine State Park in Prospect, Pa.

Sam Morrison, Doug Frost, Henry Dimmick and Ray Sielski all came out to hammer their bodies and bikes over the rock gardens of Moraine... and to be there for the party if Sam was able to defend his Points Lead in the MOM Series.

On this day, we had every class covered...well ALMOST every class. We left our skirts at home, ON the riders we left at home...!!! After ~90 minutes of dust had settled...and blood had dried(!)... Sam finished the race as the 4th Expert, I finished 9th Sport, Frosty finished 6th Veteran's 35+ and Ray finished 12th Master's 45+. So Sam was able to clinch the Expert Class Series Win as the second youngest rider to ever accomplish such a feat in the 2o years of this series. A totally AWESOME effort :) Watch Sam's Blog for more on his race. ------------------ In the Weird Injury department, I received the following from another rider. We were both crossing over a rock pile with a sharp drop on the far side... and just as I was dropping my front wheel off the ledge, to my left, I saw the other rider's head going straight for the ground as he went over the bars.

In that same instant, I felt something hit my left elbow... which turned out to be his rear wheel coming over top both of us... causing my injury, but not causing me to go down.

The (65 mile) Mother of all Cross Races!!! Mike Maher and Brian Hopkins competed in this year's edition of the Iron Cross. While the final results are pending, viscous rumor has it Brian finished ahead of Mike... so Mike's bike is for sale cheap!!! Watch for an update to this post as more information is available ...likely after they both are released from Intensive Care. Of special note: I am told that Picabo Street (of skiing fame) is a nurse in their unit... and that she answeres the phone, "Picabo, I.C.U." :)
Posted by Henry Dimmick No comments:

Race #3 of 4 of the Month of Mud Series took place today in Grove City, Pa. Sam Morrison, Mike Maher, Henry Dimmick, and Ray Sielski all raced for the good guys :) In the second race, the SPORT class, the plan was for me, Henry, to lead the pace out on the road section in order to get to the first section of single track and barriers at the front. Mike and Ray were to follow my wheel, and be able to "ride over top of me" when I started to blow.

Into the first barriers I was in 4th place with the lead group. However, by Lap #3, the fast lead-out pace was taking it's toll on me (and hopefully on others). As I began getting passed by other riders, Mike rode by me with good legs, and continued to pick fading riders off one by one. By the end of the race, Mike was able to secure 2nd Place in Sport ... which is an awesome result for his first "formal" CycloCross race, and an excellent sign of his fitness leading into next weekend's infamous, 65 mile "Iron Cross". In the Premier Race, Sam was facing three riders from the same team...all within one point of each other in the Series, and all looking to take over the lead in the EXPERT Class. Sam went out hard, working to stay in front of his points partners. By the end of the first lap, they were all still close enough to see one and other. By lap 2, he had built a 15 second gap on them. By Lap 3, the gap had grown to 45 seconds. By Lap 4, the gap had grown to 90 seconds and by the finish Sam had over 3 minutes on his "points chasers" ...ultimately taking 4th in the race, while taking over 1st Overall in the Expert Class Points Series. 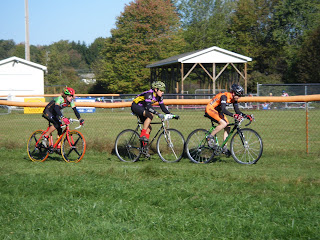 When the final results are posted at http://westlibertycycles.com/mom/overall_points.htm , we will see how much of a point gap Sam has heading into the final race of the series, next weekend's Moraine State Park MTB. UPDATE: Sam moved into 1st Place by 11 points :) Also, watch http://www.samlikesbikes.blogspot.com/ for Sam's posting.

The Month of Mud (MOM) continued this past weekend with race #2 of 4 at Brady's Run Park.

Attending were Sam Morrison and Ray Sielski. At the gun, five guys got away, with one by one slipping off the back until there were only two. With a late crash, Sam's hopes of a win were smashed, so he raced on to finish 2nd Expert putting him 2nd Overall in Points after two races. Ray finished as the 12th Place Master, moving him into 17th Overall in Points having raced only one of the two races run so far. You can read more about Sam's race at SamLikesBikes and see the overall series preliminary standings at MOM Points.
Posted by Henry Dimmick No comments: