Entering the State Park a flashing yellow board posts no advisories; Makes me wonder if there are no advisories why post? 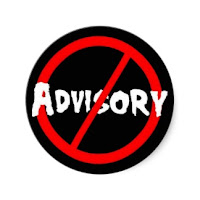 Well, there SHOULD have been a posting, because the wind was WAY UP, with small craft warnings on the lake....and in the parking lot! 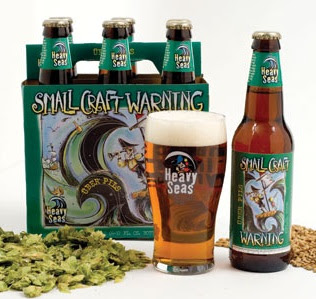 This made for a strong headwind going out and sweet anticipation of putting up a spinnaker on the way back and breeze into the finish line. Not so fast, that wind was astern and blowing sand making for a teeth clenching and gritty finish.

Through all this, Steve puts up an impressive outing. Facing a strong headwind and stronger sandstorm assault from the side Steve manages to show the rest of the field how it is done by finishing in 2nd Place Overall... 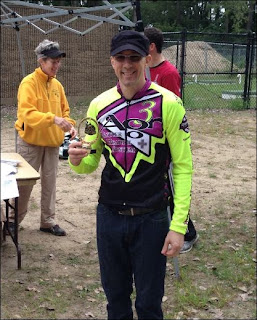 ...second overall to a rider 23 years his junior.... which should inspire all of the 50 plus class, to which Steve will join all too soon! Dammit Jim, bodes ominous for me.

Ray Sielski finishes in 7th Place of the 50-59 division, and 47th Overall.

---------------
Meanwhile, Steve writes:
High wind gusts that attempted to yank the bike from beneath you, was the main feature of the September 8th time trial on the Presque Isle Peninsula. Ray Sielski, Dave Hickey and I were there to test our TT skills as well as our nerves along with the 98 other participants. As it turned out, we were all in for a pretty good beating by Mother Nature.

Dust Devils swept across the beaches at the far end and attacked riders as the came through and I heard many reporting nearly getting blown off course.

Despite many scary moments, we all made it to the finish line.

At the end of the day I manage to slot into the second overall!! My first time in the top 3! Maybe I should whish for horrific conditions for every time trial. 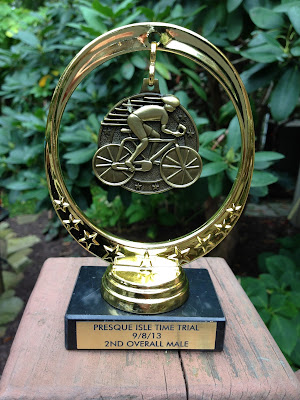 6 hours in the Valley (of Death)

Hannah Brewer, Steve Brewer, Mark Briercheck and Henry Dimmick headed east to compete in the 6 hours in the Valley mtn bike race sponsored by the Bike the Wilds group. 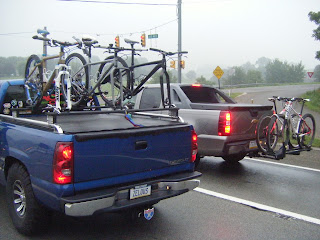 The day started foggy and HUMID, and soon turned to rain :( 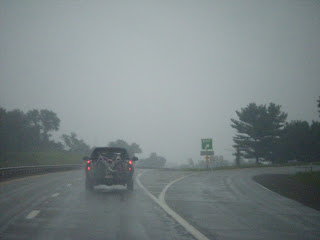 Luckily it stopped just as we arrived to the race venue....so we did not have to set up camp in the rain. 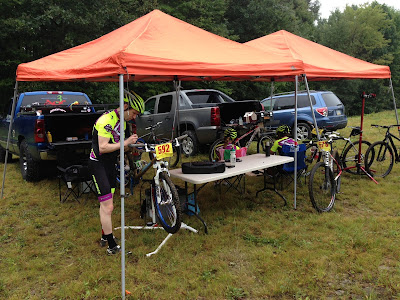 Hannah & Steve teamed up for to compete in the Mixed Duo Division, while Mark and Henry paired up (again), so to speak! You may remember THIS picture from the last time these two paired up(???)!!!

Anyway, Steve and Henry started the race, doing the first lap for their respective teams.

Lap 1:
Steve put down one of the fastest times of the day....which soon earned him the label as "Least Desirable Teammate"....since the faster he rode HIS laps, the less time Hannah had to rest and get ready for HER lap! 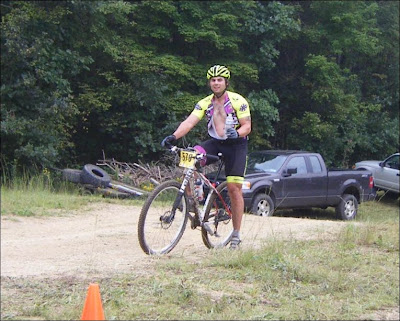 Lap 2:
Hannah put in a lap time better than Henry's... 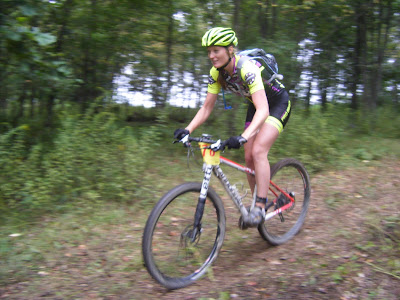 Did I mention, that Mark had JUST PURCHASED his mountain bike only 2 days before this race?

Did I mention that Mark has NEVER OWNED a Mtn Bike before? 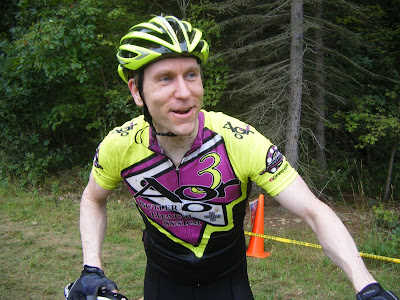 Lap 3:
Steve is still on the gas....and now has enough distance to ensure a win in the Mixed Duo Division, as long as nothing mechanical happens.

Henry posts a lap time within 15 seconds of his first lap time.

Lap 4:
Steve pushes Hannah to be fast....in order to move their Mixed Duo time up into honorable ranking with the Men's Duo teams! No....he is not competitive at all, is he...???!!! 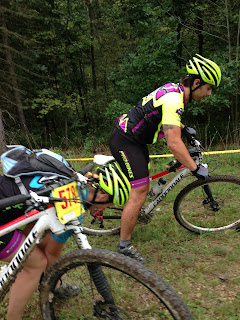 Hannah totally complies with a lap only 2+ minutes slower than Steve...and again faster than Henry!

Mark, on the other hand, GETS A FLAT TIRE on his second lap...learning painfully FIRST HAND what mtn bike racing is all about!

Lap 5:
Steve rides fast...again.
Henry rides to finish, knowing that Mark's two mechnicals have dropped them out of the top 10 rankings.

Lap 6:
Hannah stays fast, while Mark FINALLY gets his gravy lap....posting a lap time on par with Henry's times. 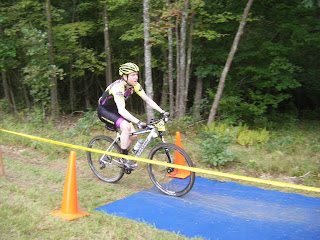 Without the mechanicals, Team Smurf (Mark & Henry) would have finished in 8th Place Overall.

Lap 7 & 8:
Steve and Hannah (Team Wario) get to do additional laps....just because they are FAST  ...and WIN the Mixed Duo Division ...and take home all the best Prizes, while Mark draws a lucky door prize and wins a replacement tube for the one he flatted... 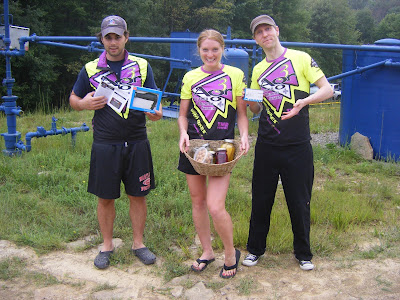 ...while Henry wins NOTHING :) 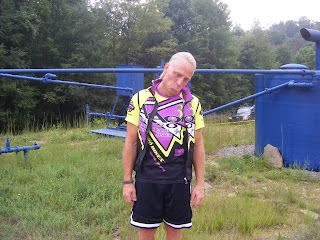 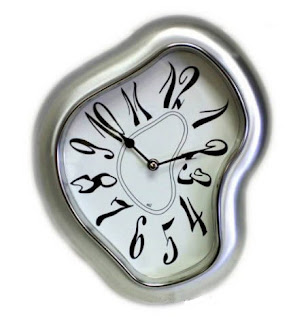 Perfect conditions for the second week in a row at the Bud Harris oval. 70’s, clear, no wind. 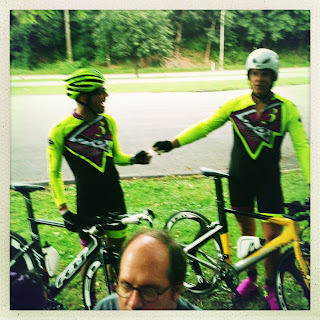 Steve said:
What a way to complete the last time trial Race of the season at the Oval: first place, new PR, and my 12th 25-mile TT under one hour.

On top of all that, it was a beautiful night, two teammates (Ray and Mark) were there to suffer it out with me, and my wife and neighbors came to cheer us on. 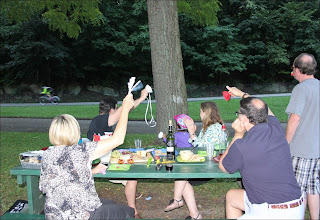 A nice end to the summer series!
Posted by Henry Dimmick No comments:

With ONE race left to go in this SIX Race Series, Rich sits in 2nd Place Overall in his division....in a 4-way fight for the Podium.

Two things made this evening a special one....

FIRST, Ray finished in the Top 10...with a 9th Place Overall Finish!

...and SECOND, this was Ray's 101st race as a member of
Ag3r-ButlerHealthSystem! 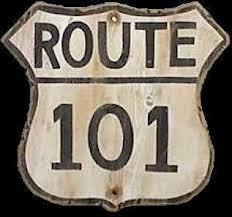 The White Park Throwdown is one of my favorite mountain bike races of all times.

It may be the ONLY race course that does not feel like it is uphill both ways. Although it is not rocky, the tight turns, flowy single track, roots, and pump-track sections make it somewhat technical at race speed. And since there are no long uphills, there is no time to rest either: It is a "pedal hard the whole time" kind of course.

This year, the slip-n-slide mud made it extra technical, and small roots and log crossings became a challenge for me. I had to slow down and hit them at the correct angle or I would wipe out. Ok, I did wipe out. But only once!

Being that it is my first summer racing in the women's expert field, I've been trying to pace myself and not go out too hard since the expert distances are longer than what I am accustomed to riding on a mountain bike. I was in 4th place for the ladies when we dropped into the woods on the first lap. At this point, I was hoping to ride consistently and keep my 4th place spot.

As the laps went on, my legs held out and I managed to move into 2nd place. All that climbing in CO with Sam and Deidre and chasing Richy at Moraine must have paid off!

With two laps to go, I saw a (fast-moving) flash of Top Gear's ultra-fasty, Jill Dugan, through the woods. And then "poof", she was gone again.

But with three strong ladies on my tail and the anticipation of being lapped by Gunnar or Gerry Pflug, I knew I needed to keep my pace fast, even though I felt like I was riding alone in the woods.

As the mud finally started to dry up, I crossed the finish line in 2nd place for the Women's EXPERT field. It was a good day.

Getting on the podium and not getting lapped by the boys made for a great race...

...but sometimes the best thing about racing is feeling good on the bike and enjoying the ride.