1) Dark Chocolate is Good for Your Heart
Studies show that eating a small amount of dark chocolate two or three times each week can help lower your blood pressure. Dark chocolate improves blood flow and may help prevent the formation of blood clots. Eating dark chocolate may also prevent arteriosclerosis (hardening of the arteries).

2) Dark Chocolate is Good for Your Brain

Dark chocolate increases blood flow to the brain as well as to the heart, so it can help improve cognitive function. Dark chocolate also helps reduce your risk of stroke.

Dark chocolate also contains several chemical compounds that have a positive effect on your mood and cognitive health. Chocolate contains phenylethylamine (PEA), the same chemical your brain creates when you feel like you're falling in love.
PEA encourages your brain to release endorphins, so eating dark chocolate will make you feel happier.

4) Dark Chocolate is Full of Antioxidants

Dark chocolate is loaded with antioxidants.
Antioxidants help free your body of free radicals, which cause oxidative damage to cells.
Free radicals are implicated in the aging process and may be a cause of cancer, so eating antioxidant rich foods like dark chocolate can protect you from many types of cancer and slow the signs of aging.

Dark chocolate contains theobromine, which has been shown to harden tooth enamel.
That means that dark chocolate, unlike most other sweets, lowers your risk of getting cavities if you practice proper dental hygiene.

Theobromine is also a mild stimulant, though not as strong as caffeine.
It can, however, help to suppress coughs.

6) Dark Chocolate is High in Vitamins and Minerals

The copper and potassium in dark chocolate help prevent against stroke and cardiovascular ailments. The iron in chocolate protects against iron deficiency anemia, and the magnesium in chocolate helps prevent type 2 diabetes, high blood pressure and heart disease.
Posted by Henry Dimmick 3 comments:

Going into the last race of the ABRA Cyclocross Series, the top spot was locked up by the super fast Gunner Shogren, but there were three racers vying for second place. Only separated five points, Jeff Guy, Jay Downs and I were all in position to grab that coveted podium spot for the series. So the race was ON before the whistle even blew!

Start of 50+ Masters
Photo by Mike Briggs
As expected, the three of us spent the first 4 laps battling it out through every muddy turn and obstacle on the course. During the next-to-last lap we all slipped and fell in the turns as we each tried to break away from the other two.
One of the best parts of this race was Henry and Kirk cheering for Mark, Ray and I during the Masters race. I heard Henry shouting race info as I passed. He seemed to be at every turn, letting me know how hard the others where breathing and encouraging me to be patient in the early stages of the race. On the final laps he told me it was time to go hard and stop messing around :))
In the final lap Jeff slid out while navigating a tricky off-camber turn, allowing Jay and I to get away. Jay was in front, with me on his wheel, looking for a place pass. Early in the final lap I managed to run past Jay while going over a log. Once in front, I put the hammer down, but I knew Jay was not going to give up easily and there was a possibility of Jeff coming back as well. 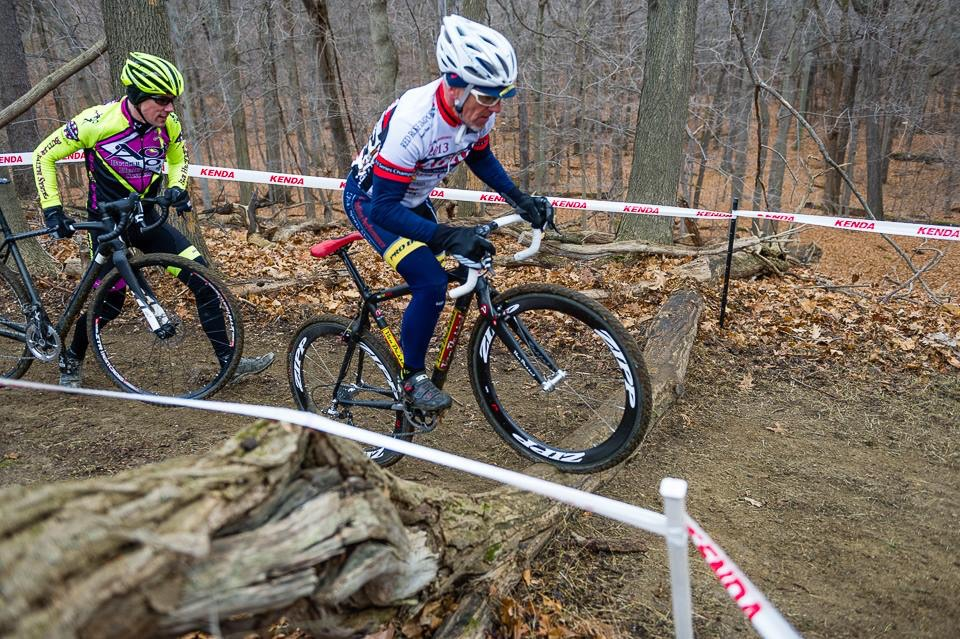 Running the Log behind Jeff
Photo by Mike Briggs 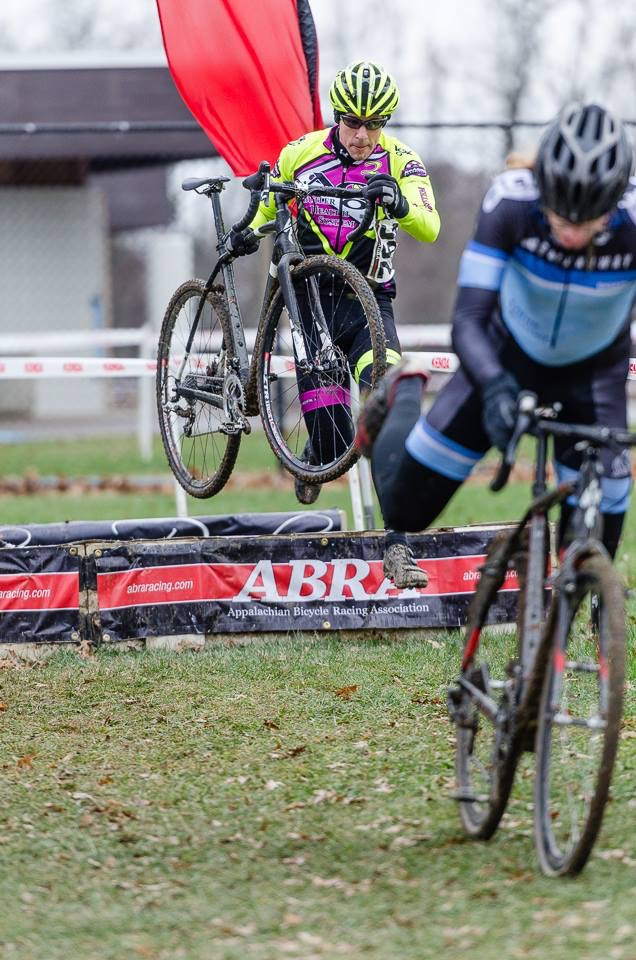 Chasing Jay Next to Final Lap
Photo by Mike Briggs
As I came through the final turn, Henry yelled, “You have a five second lead, relax and keep it upright.” I crossed the line in second, securing 2nd Place in the race AND in the Series for the team! 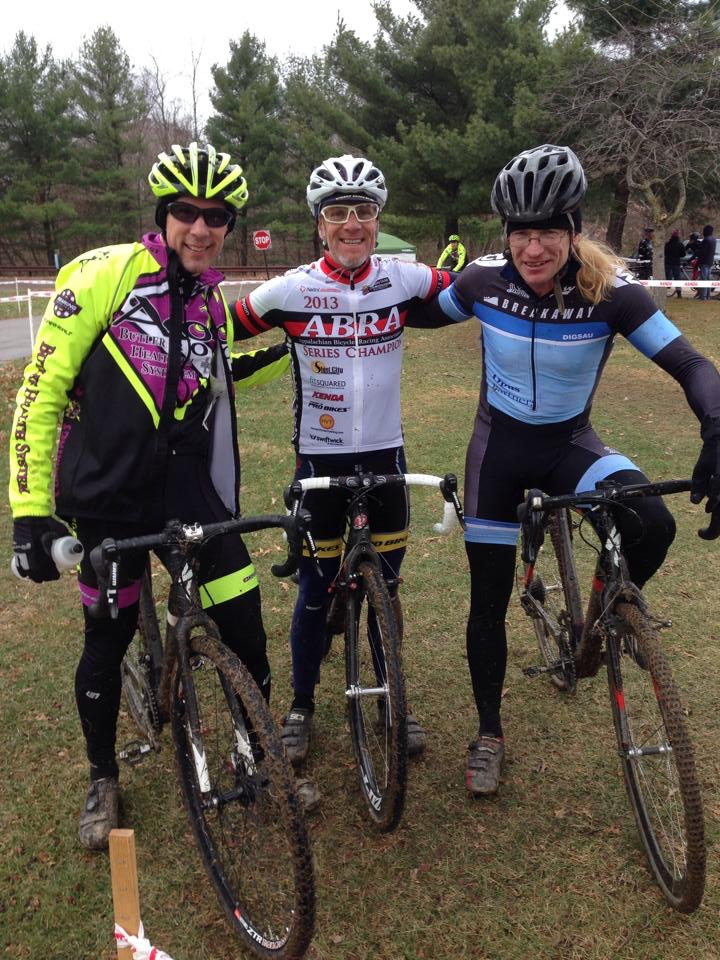 Ray Sielski 4th Place Series Podium
Photo by Steve Marlette
...and Mark Briercheck completed the second of his back-to-back races for the day. It was an awesome race with great competition, the best team support, an outstanding race promoter and fabulous sponsors.
But perhaps the most memorable thing was Henry holding the umbrella over me at the start while the freezing drizzle came down. After that special treatment, I knew I had to perform for the team! 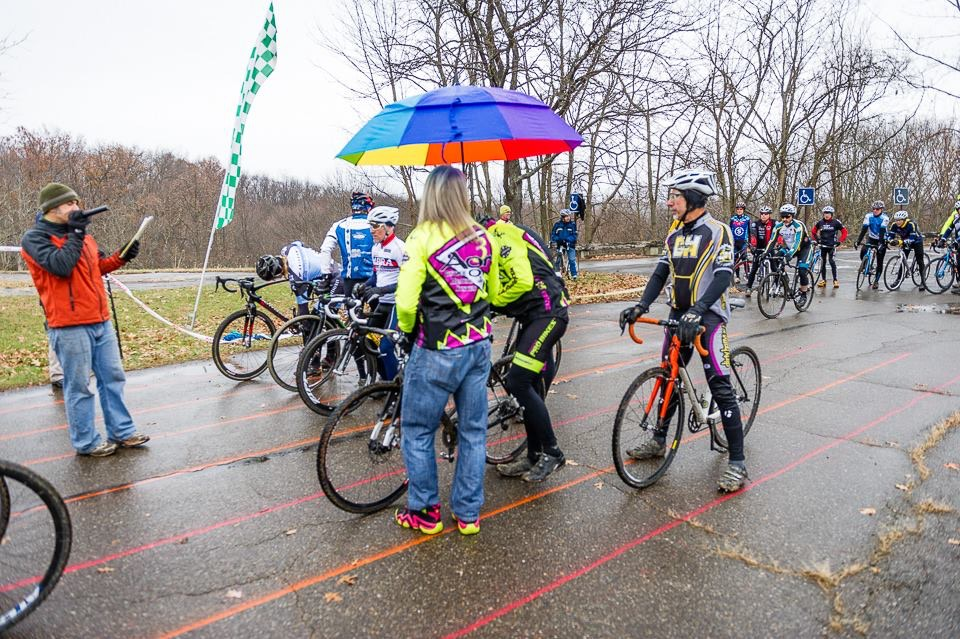 Henry Holds Umbrella
Photo by Mike Briggs
Thanks to ABRA Racing for another excellent cross series, and to my teammates for the great company at all the races.
Also, a BIG thanks goes to Mike Briggs for taking spectacular photos on this cold wet day.
...and finally, THANKS to Ag3r for supporting the team all year long.
BEST CROSS SEASON EVER...!
Overall Series Results:
http://www.abraracing.com/Results/2014abraCXstandings.pdf
Posted by Henry Dimmick No comments: