My last ride in Florida 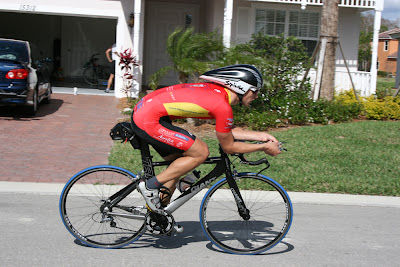 Here I am arriving home from my last ride in Florida before I have to leave tomorrow morning at 6:00am to return home to VA.
Posted by Unknown No comments:

Hello everyone! I'm new to the blog. My name is Duane Corbett and I'm the President of the new IUP Cycling Club. I wanted to help get our name out and let everyone know that we're here. Check out our website www.people.iup.edu/tkcn and drop me and email if you would like to become involved, we have a lot of excitement planned this semester. The club is open to students but we do encourage community involvement. Interests levels vary from road to mountain and casual to competitive. We will be also competing in the Eastern Collegiate Cycling Club road racing season this semester. Our first meeting will be Friday, February 22nd at 6:00pm in the HUB Susquehanna room. Thanks! -Duane d.b.corbett@iup.edu
Posted by Duane Corbett 1 comment:

The race ran from 6:30am til 6:30pm so it started in the dark and ended at dusk. Since we would be starting in the dark the race began on the Sebring International Raceway. It is a road course with a total of 17 turns on the flat 3.7 mile course. 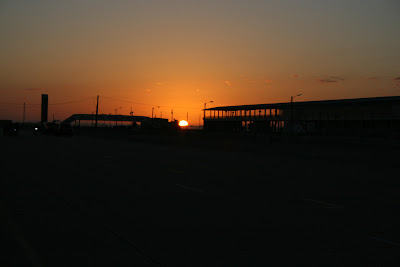 We would be on the raceway for 3 laps and that would give us just enough time that the sun would be starting to rise and then we would head out onto the road. The Raceway was awesome to ride on. It was really fast and it was fun to ride on a closed course. I'm not exaggerating when I say that you could maintain 22-25mph on the raceway with barely any power output because of how smooth and flat it was. By the time we headed off of the raceway I was already the first double diamond bike in the 12 hour race. There was a guy competing in the 24 hour race who was off ahead of me and there were about 8 recumbent. I can understand that the recumbent bikes were more aero than I, and figured that they would be out front by themselves but the guy riding the road bike with clip-on aerobars was just a machine. 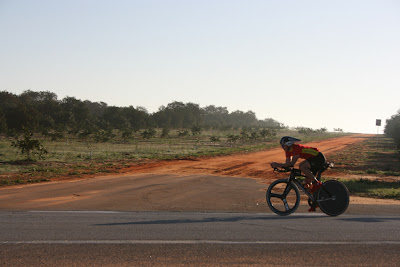 He stayed ahead of me for the entire 12 hours and was still going strong into the night. After we finished the 3 laps on the race way we had to complete a large 89 mile loop in the surrounding countryside. The course was extremely well marked and there was never a question if you were headed in the correct direction. It was rolling hills through orange groves and there wasn't much traffic to speak of. 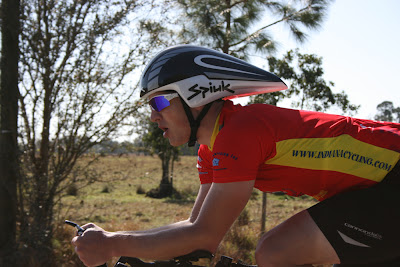 There was very little wind in the morning, which was unfortunate because it would have been at our backs the whole way to the first checkpoint/turn-around point. I had 4 bottles of Accelerade and a whole bunch of Gel so I didn't need to stop at the turn-around, just gave them my number and kept moving. I figured I could make it to the second checkpoint (at 80 miles) in about 4 hours and that would be right about when I needed a bottle refill. 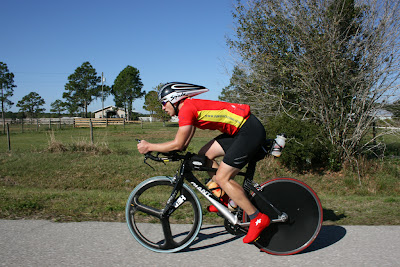 The checkpoint only ended up being at the 76 mile point and I was ahead of schedule so it only took 3.5 hours to get there so I ended up with Accelerade to spare. After a quick bottle change I was back of the bike and straight into a headwind. It started off weak and then eventually picked up a little. I ended up riding into it for about the next 10-15 miles or so. I had to keep telling myself not to try and fight it too much because I still had 8.5 hours to ride. The nice thing was that after we made the final turn of the first large loop we got to finish the loop with 5-10 miles of tailwind. After completing the large loop we returned to the entrance to the raceway which would serve as a turn-around point for the shorter 13 mile laps that we would be riding for the rest of the day. 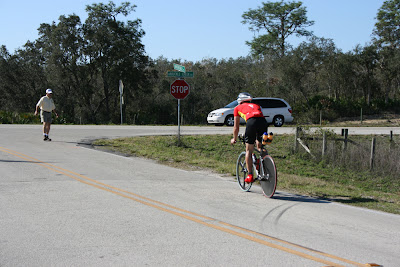 I decided that I would head out for one lap on the 13 mile loop and then do a bike change to a road bike, just to allow myself to stretch and change the muscle groups that I had been using. I used the road bike for the following 2 laps. These 2 laps were a dark time of the race for me. I felt horrible and questioned whether I would even be able to finish. It was at this point that the guy on a recumbent, with whom I was riding earlier in the day came by and reminded me that there were always bad times in ultra cycling events and that I just needed to ride through it and eventually I would feel better. I guess that is true since eventually you will either feel better on the bike or the race will be over and then you will feel better off of the bike. 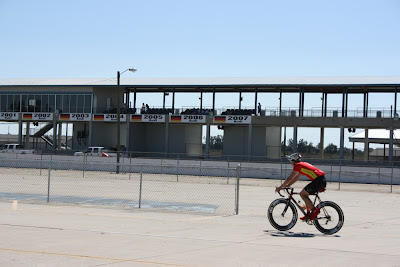 Then decided that the wind was getting to be too much and that my TT bike was much better suited to the task of the gently rolling course. When I mention that there were hills on the course I feel that I should explain that these are only hills by Florida standards. With a little effort you could ride up them 23-25mpg and were never slowed below 15mph even if you soft pedaled the hill. The wind became a much bigger problem than the hills ever were. The switch back to my TT bike was the last bke switch of the day for me. first, because it was better suited for the job at hand; second, because I didn't want to have to keep changing timing chips between bikes; and third, because I was so tired that my arms felt like Jello and resting them in the aerobars felt nice. After this point I was figuring in my head how many laps I would be able to complete before the end of the race and I was just counting down to the finish. At some point I switched from Accelerade to Gatorade just for some variety and I made the change from all gel to some oranges, bananas and grapes. After 5 short laps I made the decision only to stop every other lap because this saved me some time and it gave me something to look forward to. At one pit stop my mother was dumping water on me to cool me down and I kept yelling at her that it was freezing and she kept answering that it was lukewarm water so I guess my perception of reality was gone by that point. On lap nine I knew that I could easily complete 2 more laps but there was no way I would have enough time for 3 so I rode with a guy on a hand cycle who was out to break the world record for distance in 24 hours. I let him draft off of me for the whole lap but it took longer than expected so I had to hammer the last lap and that would prove to be my downfall. After riding for 11hours and 35 minutes it was in my last 15 minutes of riding that my stomach shut down and it would remain that way for the next day and a half. At the pit after I finished my last lap, I had to have one person hold the bike and another person hold me because I couldn't lift my leg over the bike by myself and I almost did a face plant into the dirt or the palm tree we were standing beside. Waiting just over an hour for the award ceremony was torture because I was nauseated and freezing (in 60* weather, it had cooled down from 85* during the day). I ended up finishing first in my age group and first double diamond frame with a total of 232.5 miles on the day. I don't care if Florida is flat, that is still a long way. It was fun (sort-of) and now it is check off of my to do list. I don't think I'll be attempting anything like this again anytime soon. 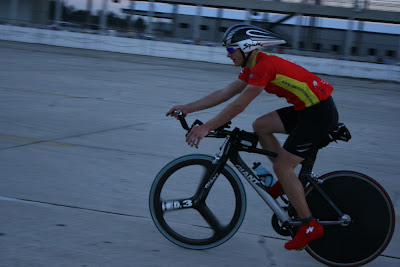 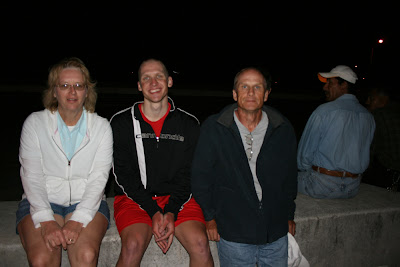 Here I am with my great pit crew 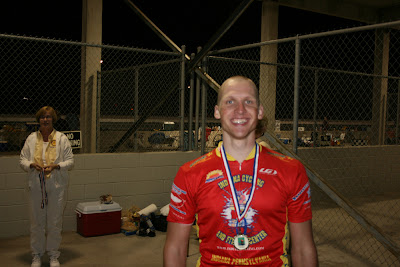 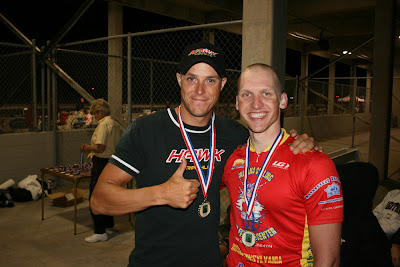 Me with professional triathlete Sven Folmer from Australia (he got second place)
****12 hour results
****24 hour results
Posted by Unknown 3 comments:

Posted by Unknown No comments: 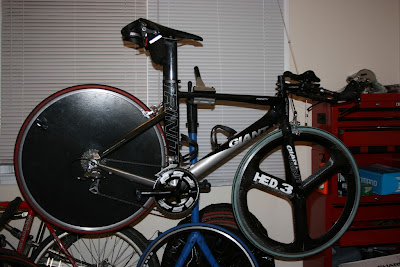 My bike is ready to race, I don't know if I am.
Posted by Unknown No comments:

Ok Brian,
Now your no the only one that will be posting ont this site.
Posted by Rich 2 comments: 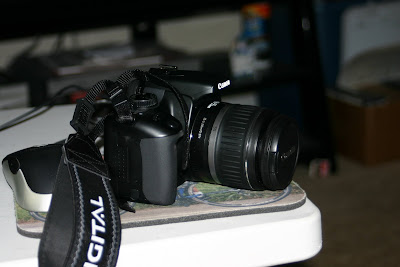 Anyway, less than a week until I race at Sebring, FL. I'm doing the 12 hour race. Since my longest ride this year was only 112 miles and 5.5 hours long, 12 hours may be a bit of a stretch but it should be fun. I'm sure it will make for good stories in nothing else.
Posted by Unknown No comments: