Our 12th annual bicycle tour of Butler (Pa.) neighborhoods... to look at Christmas lights... sing carols outside the best displays... while visiting each neighborhood bar, was completed during a record temperature of 60 degF... with only 2 (momentary lapse of reason) crashes, and 1 (poorly timed) curb-hopper flat tire (...and bent rim) !!! Additionally, Roger Lutz successfully defended his 2007 Foosball Championship :) Also, thanks to Mike Maher for the Ag3r Cow Bells, helping to "herd" us through the evening! 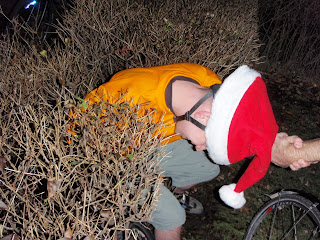 :)
Posted by Henry Dimmick No comments:

New post on my testing from a little earlier today. Yeah, I'm stronger, like it really matters in December.
Posted by Unknown No comments:

Ag3r Cheers, for all our 2008 racers !!!
Posted by Henry Dimmick No comments:

Whoa. It has only been 9 hours since Sam & I got home from States, and now I gotta leave again for another race! Knowing this would happen, Sam and I left all our stuff, bikes and clothes included, IN/ON my truck overnnight just so it would all be (ready) for today… as well as damp and cold! Super-Fan, Doug Frost… ...came over to my house with his Propane Heater and together we headed down to Murrysville to put up the race banners... …and set-up camp for the others. When we arrived, it was already raining and 35degF and WINDY, just as forecast… so it was a GREAT thing to have a heater! In fact, our tent served as the warm-up location for both the Elite Women's Winner and the Elite Men's Winner, neither of which are from our Team … yet :) Racing today were Henry Dimmick (me!), Sam Morrison, Rich Allen, Ray Sielski, Mike Maher and John McClintock. In the Men's C Race, John finished 12th, Rich finished 13th, and Ray finished 14th…a sweep, you might say!
In the Men's B Race, after a race long battle with Chris Mahew, Sam took 2nd Place... …while I finished in 16th place.
Mike discovered that his Frank-n-Bike, single speed creation, was not ready for prime time play when he broke his chain near the beginning of Lap 2…coincidently very near our Tent! In the Men's Masters Race, Ray took 9th Place, in his SECOND RACE of the day, in very difficult conditions… making HIM Sunday's Ag3r Hard Man :)
Before leaving, Sam and Kirk Morrison helped me tear down our camp, then split.
I then helped Fred Baldassare, Race Promoter (on left)...
...& Team Freddie Fu tear down all the tape and stakes.
At the end of my 40 hour odyssey, I had traveled 715 miles, used 48 gallons of gas, and spent 14 hours driving… to compete in a total of 3 clean races and one COLD & SLOPPY one, covering 38 miles in 3.5 hours.
Just as darkness set-in, the rain changed from light to HEAVY. Luckily, we were just done with clean-up and getting into our cars for the drive home. What a GREAT weekend :) More can be read on Freddie Fu Team Blog, under BLOG PEEPS, to the right -->
Posted by Henry Dimmick 1 comment:

After leaving at 5am last weekend, Sam Morrison and Henry Dimmick (me!) woke at 3:30 for a 4am departure and a 650 mile, 18 hour trip to Allentown, Pa. Most of the way across Rt80, we encountered a Boy Scout Troop selling coffee, animal crackers, fruit and lots of other stuff under multiple tents at a rest stop... allowing us to re-stock our snacks in return for a donation. Once at the race site, we set up camp... and got ready for a long day. The first race of the day for (us) was the Men's U19. After winning the Ohio State U19 race, Sam took 1st Place again... but this time, as a resident of Pa., he was actually able to (keep) the title! Next up was the Cat 2/3/4 race... the most highly populated race of the day. I got shelled, finishing 21st ... but knew I had lots more miles left to go in the day as I was planning on doing the very next race, the Masters 1/2/3 race. Things went a bit better in this race, where I finished 6th in the 1/2/3, 45+ division.

The last race of the day was the Mens 1/2/3. About 30 minutes before the race, Sam started working me to race along with him... so I could accumulate 3 total races on the day, a record! Being weak to peer pressure, I cracked open my wallet and shelled out a few more dollars to endure even more fun and pain! While I whittled away time near the back, Sam was near the front, spending the hour racing for 5th. But in his own 2nd race of the day, ultimately faded during his back-and-forth battle to take 6th in the Cat 1/2/3. By the end of the race, the sun was getting low in the sky, and we still had a 5+ hour drive home. All in all, a great course, and well worth the long drive to get there. And tomorrow?

The Murrysville CX. With a weather forecast of 35 degF and rain. YUK!