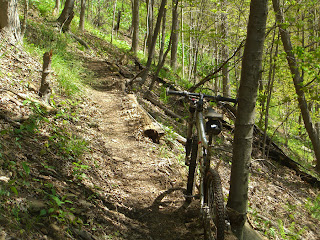 Today I took my first MTB ride of the year. I haven't been on my Rush since last year when we were doing night rides on Monday nights. I had my bike out last week to look it over and found that my front wheel was not pointed straight but had been twisted to the right when the bars were straight. It wasn't much so I really didn't realize it and with the front fender on I couldn't see my wheel so that helped conceal the problem. With that fixed I had a whole new mindset heading into today that all of my problems of last year were because of that and not my poor handling skills. It was a beautiful day for a ride with a temperature of 60* at the beginning of the ride but 70* by the end, and it was sunny and cloudless the entire time. I was riding at Roaring Run in Apollo. The trails there were pristine. I must say my new found confidence paid off because I did seem to be riding better than in the past, although not nearly as good as the company that I usually ride with. It was a great day to be in the woods with my bike. Now hopefully it won't rain for every MTB race again this year. 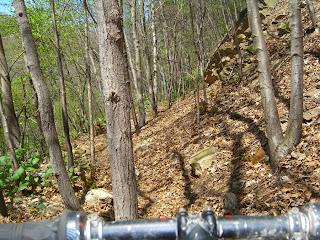