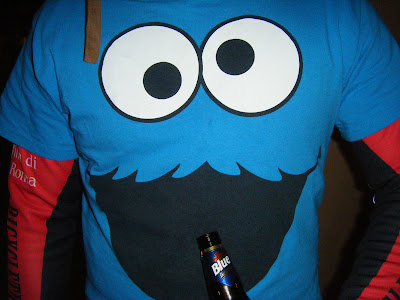 After finding my headlights shot for good I had to hammer in between traffic surges on Rt 8 and I made it to HD's winded but in time for a beer! Unfortunately I gave him some shit about the hippy hair and was downgraded to Pony bottle. Lesson learned. Soon Kirk arrived (wait - shouldn't he be writing the Captains Log?). Finally KD rolled in looking somewhat overdressed for the occasion. Which begs the question, what would look more out of place at the Island Bar, Fluorescence Lycra pants and an elf hat, or a well tailored suit? I think the answer is obvious. So did Ken. He bowed out of the festivities. But having previously determined that a man in a a suit CAN get in and out of there without getting stabbed, he treated us to a round at the Brick House to get us started! 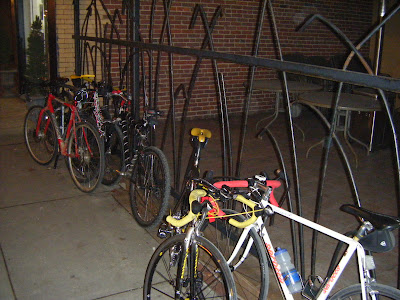 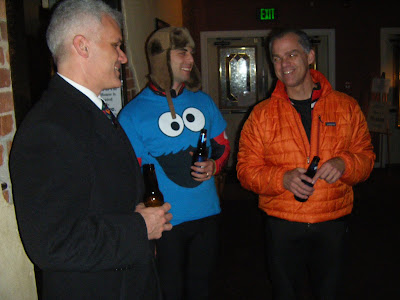 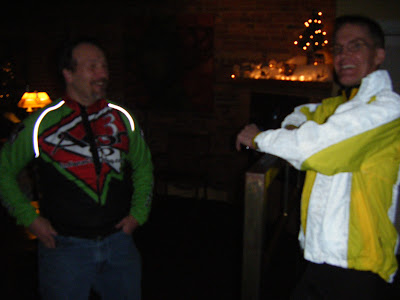 Funny story: Prior to heading to the Brick House when we were gathering on the lot, and some Kranack's riders passed heading South on Main. After we yelled out to them, they realized it was us and came back to talk. They said they didn't realize they knew us at first...??? JeeBus! Here's a clue. If someone even "knows" what Kranacks is, chances are you know them! You guys look great and all, but we're not talking Astana here!
Departing the Brick House we found our track around collarbone corner and up McKain street. The ambitious uphill route selected somewhat deviously by HD to knock the Foos out of me. Unfortunately, his plan succeeded and a devastating blow to my self esteem was inflicted soon thereafter.
The boulevard was a disappointing display this year. A few restrained white light displays following the "L.L. Bean Guide to Looking Like Everybody Else" handbook to a tee... but once dropping down to Butler Health System, better lights were to be found. 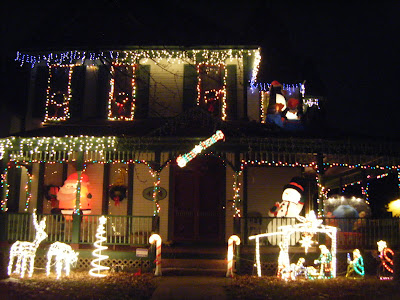 Arriving at our traditional first stop we proceeded to do some stuff that we sometimes do there and it really doesn't matter and I don't want to talk about it... (!!!) 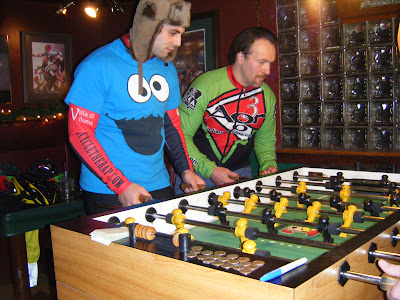 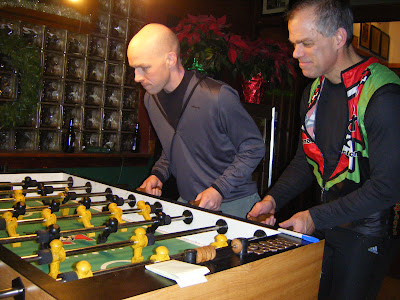 (Photo: 2007/2008 Repeat Champion Lutz, & new 2009 Champion Morrison)
Several rounds of "Canadurine" beer in the sweltering heat of the artist previously known as the Evans Inn, and we were off... 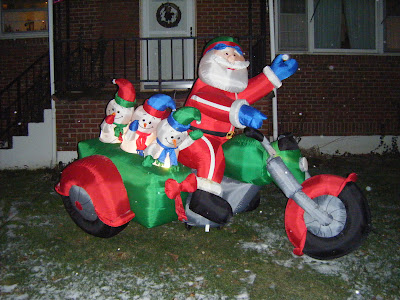 Thinking our next stop would be the Monroe Hotel we instead hosted an impromptu gathering of cylists in the middle of Cecelia and Locusts street intersection. It was . Santa Rapp was there, and surprisingly coherent. The police stopped by to eye us up so we moved on down the road.
The Monroe Hotel was.... The Monroe Hotel. It's never been quite right since it's conversion to a Chucky Cheese with beer atmosphere. But it was necessary to go there in order to up our bar count. Especially since instruction later radioed in by the chairman of our Californistan contingent strictly forbade another visit to "My Buddy's Place"!!! Frankly I was glad to get clearance to forgo that. I'm still having nightmares from that David Lynchfest. Anyway, the Monroe peanuts were free and gave us added energy for our next adventure... 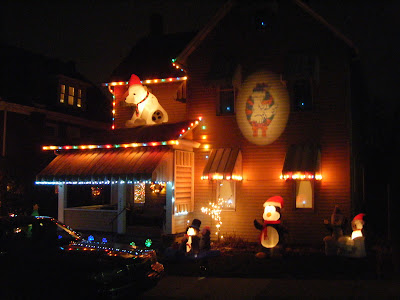 ...the first annual crossing of "Lookout Bridge". Lookout Bridge is the new name of the 45 foot long span once called (albeit unofficialy and sans signage) Monroe Street. Having been declared too dangerous to traverse, then reopened even though they did nothing to it, then closed again, I guess they felt a new name was needed so we'd know they actually DID do something to fix it this time. On the ascent of the bridge our team halted for a repair of Brewer’s chain performed by Seevers while illuminated by Morrison. 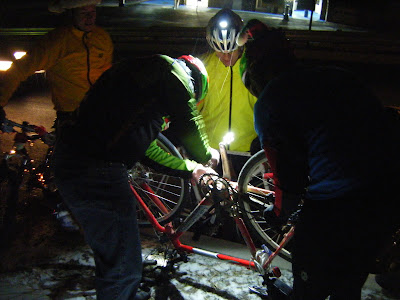 This gave Henry and I time to realize that we were indeed loopy enough to ride our bikes down the snowy cliff side to the railroad tracks. So of course we did just that. We damn near had Randy talked in to doing it on his LiteSpeed road bike. HD cracked and showed him mercy. I guess one surgery a year is enough. Still, this paragraph could have been better had HD held firm a few more minutes. 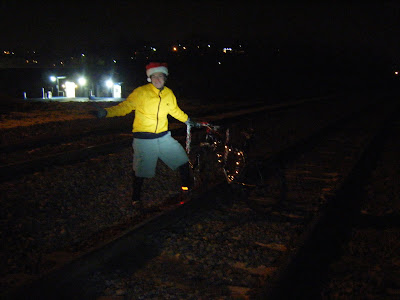 "The Usual Suspects" The alley house was decorated but dark. As disappointed as we were, we showed some Christmas mercy and sang a Christmas carol to them anyway. Knowing how well that place is normally lit, I'm betting a blown fuse.
The winner running as many years as I can recall won again. Their neighbors were starting to compete though, so the next few years should be interesting. 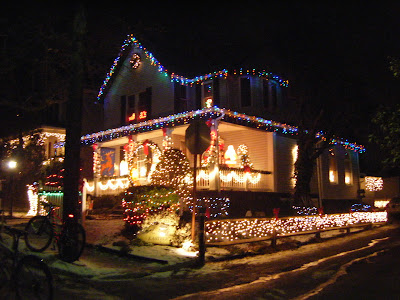 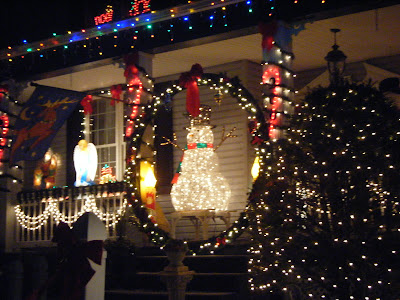 Other houses on our route showed promise, but no focus. The winner was again crowned with a carol, and we rolled across Butlers other new bridge...to The Island Bar.
This improbable corner bar always shows us a good time. Although our hostess failed to personally appear, she phoned in some free drink chips to her stand in. Many a beer, and a fuex fight with the bushes for old time sake. 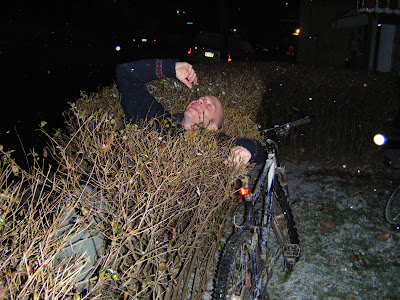 We had a nice time there, but unfortunately left too late for Pizza. How it can EVER be too late for pizza is beyond me, but the Pie Heads shut us out.
Things were getting a little fuzzy by the swinging bridge, but then, that pretty much is how it should be, so no problems there. 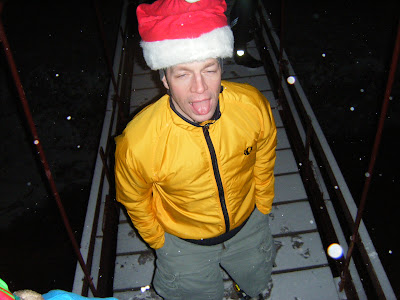 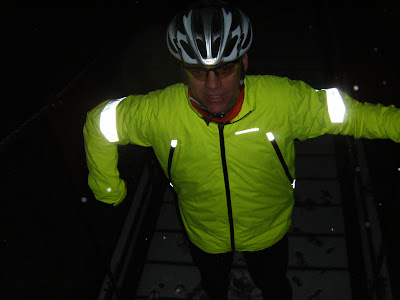 We decided that the emptiness of our pizza hole could be adequately filled with BACON! So we rode up to main street and pointed our bikes north... 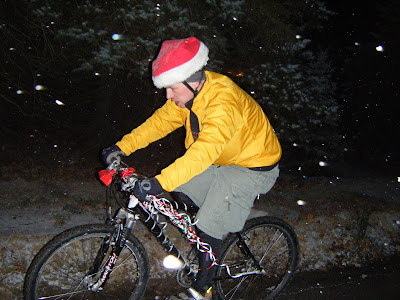 ...then...I remember talking to some dead relatives... there was this light... then I was sitting next to Steve and he was playing with a fuzzy green chicken nugget that he found in the Eat n' Park planter....
...then I was skidding donuts in the snow and then I woke up with a horrible headache. And that's the way it was. A good time with good friends… and I suppose even with that Newbie who shut me down in foos.
Merry Christmas!
Posted by Henry Dimmick

Stick is really funny! I will now go and delete my blog as it Pales and Scrawnies in comparison!