After an evening down pour to loosen up the single track sections the sun came out and revealed a glorious day.
﻿
Greeted by the Peanut Butter Festival Queen and with her blessings, Team Ag3r headed off to the start line.
﻿ 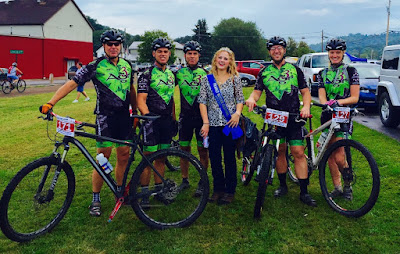 Off we go and this is the last we see of Richey and Hannah, sprinting up the road and off into the double track.

Forget about Bobby as he was the first off the front.

Double track with gravel bumps that dump you into a ravine for a crossing with a climb into more single track. That is the bump and dump section on the map. Here things are a bit bunched up as the riders are not yet sorted out.

Soon you ascend to the highest elevation of the county on double track that opens up to a blue sky view of the surrounding valley.

Back down into the single track where Kirk decides this is a good time to change out his chain.

Confusion at the tunnel as they mixed up the course a bit, however they left the water in the creek so racers received a bike wash for their efforts.

Next onto low land river view single track before the ramp up to the finish.

Here Ray decides to pass and pull out his lead until the gravel pit round about, a bad decision takes him out and results in a lost podium position.

Kirk rebounds nice and finishes with a clean chain.

Off to awards after and podiums.

Hannah impresses all with a Race WIN and with another Bike the Wilds Series WIN.

Later in the day, it was revealed HOW she does it:
Rich pulls a PHANTOM on the podium stage for his placing in the race :((
Bobby is the biggest winner as he shares the podium with a cast of EXPERTS for the BTW series.