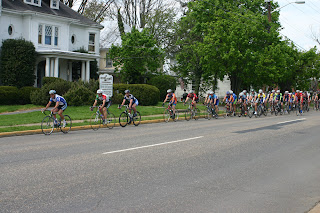 On Saturday I was in Harrisonburg, VA for the Tour of Virginia criterium. It was 15 laps of a flat 1.3 mile course. There were two 90 degree corners and one 160 degree corner. Now to set the stage for this story there are a few things you need to know about me and criteriums. First, I have never finished one. I've only tried two of them but didn't finish either because of a wreck occurring in front of me in both and I never caught back on. Second, I don't like them. Finally, third, on my yearly training plan that I wrote in December one of my season long goals was just to finish with the main pack in one of these crazy events. Now back to the race. It was a good field of cat. 3, cat. 4, and juniors. I figured it would be fast since this is one of the larger profile events in VA, similar to the Tour de 'toona in PA. The race started out fast and never let up. No one wanted to let a break go anywhere which was fine with me because that meant I just got to hide from the wind until the last lap. It was a nice day in the high 60's at race time and sunny. The race was very uneventful and actually easier than I had thought it would be. Now jump to the end...............Coming down the final straight I had positioned myself in fifth or sixth place for the sprint when someone from behind me takes off like a rocket. I say to myself, "Self, this is your chance." So I follow his wheel. It seemed to be going well at first as he seemed to be going strong. Then all of a sudden he just died. Right in the middle of the road he just putzed out. So there I was into the wind with 500 yards still to go. I knew I was in trouble so I just took off and hoped for the best. With about 200 yards I hear the clicking of derailleurs and there goes a guy whizzing past and then another and another. I ended up finishing 4th cat. 4 and 7th over all. Not too bad, but not too good either. On the other hand I did finally finish a crit. with the main pack and I was happy about that. 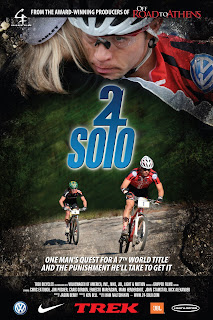 I also got to see the movie 24 Solo in the theater in Harrisonburg. It was a cool experience. The director of the film was there to talk about the making of the movie. Sue Haywood was there to watch the movie, she was also in the last movie from Gripped Films, Off Road to Athens. There were also a bunch of the pros who had just finished their race who decided to stop by and see the movie. It was truly awesome. I'm not sure if it would have been as powerful if it was not in a movie theater but I do know that I'm psyched to go ride my mtb. I'll be getting the receiving my copy of the movie in the mail this week if anyone would like to see it let me know. It may be the greatest cycling movie ever!
Posted by Unknown

so you are familiar with these films