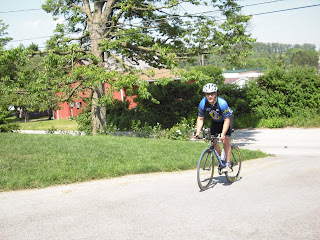 Well this was my second voyage on a time trial bike and I must say that I was impressed. Now the route I took wasnt the best for this type of bike, and the bike deffinately does not fit me right but i was able to make due. the ride the day before was much better and flatter but i had spent most of my time trying to get the bike dialed in for this coming wekends erie time trial.

I did 50 miles from Cambria county into Indiana count and home. the first portion was pretty hilly but others that were flatter were great fun. Speeding along in the mid to high 20's, when the wind was not in my face, seenmed effortless. even the headwind did not seem quite as bad. 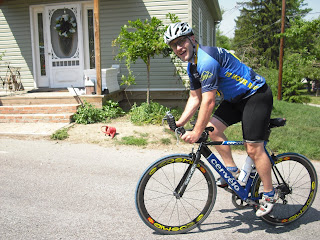 The seering heat was probably the worst thing to deal with on teh day, and the limited water that i could carry made me have to stop a couple of times to refill. No real heart problems today to speek of but had a little flutter near the end. I think it is mostly due to slight dehydration and gatorade type products seem to have an effect as well. I usually use ELITE but did not have any with me.
Posted by Rich