The name of this race makes it sound like "A Day in the Park", when it was actually more like "A Day at the Beach"!!!  After what appears to be more running than riding...

Hannah Brewer finished in 6th place of the B2 Womens Cat 1,2,3 Race 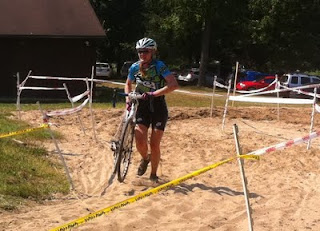 Steve Brewer finished in 7th place of the B2 Mens Open Cat 3,4 Race 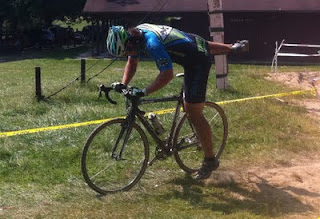 Brian Hopkins finished in 8th place of the B2 Mens Open 3,4 Race 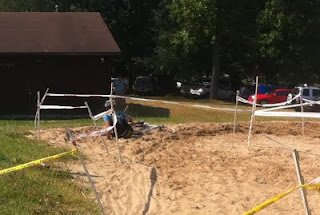 -----------
Kirk says:
Despite temps in the mid 90’s I couldn’t resist the opportunity to join Hannah, Steve and Brian at the NEOCX Camp Manotoc cyclocross race.

Camp Manotoc Boy Scout Camp is located in the Cuyahoga Valley National Park (between Cleveland and Akron) and is only open to bikes during this one week/year. This was a well attended day with the camp opened to Mtn bike trail rides and about 10 vendor tents including a large Specialized factory booth (with loaner bikes).

The course was fairly flat with an extensive, u-turn sand pit, one set of barriers and two tight technical sections through wooded areas. The days biggest challenge was the heat and high humidity (with a heat index of almost 100 degrees).

After my race I found a shady spot near the sand pit to cheer on Hannah, Steve and Brian. In the spirit of Cx, I was offering beer handups to my teammates (Shockingly, I noted that I was the ONLY spectator offering this (!?)). As their finishing places demonstrate, my teammates were more interested in being fast than my handups...so "I" had to drink them ALL!!!

Attached are a few pics that I was able to take near the sand pit area (including one of Brian after a tumble in the sand pit …….. a gallant effort to ride where almost everyone else was running). Also, a video that shows Steve riding the sand pit. While many tried, Steve was the only person I saw who was (pretty much) successful at this.

Below is a link to the results:
http://lakeeffectracing.com/2011-cyclocross/big-valley-results