Kirk Morrison and Rich Allen traveled down past Morgantown to Coopers Rock State Park for the Henry Clay 30K Mtb XC race ...with the following Results: 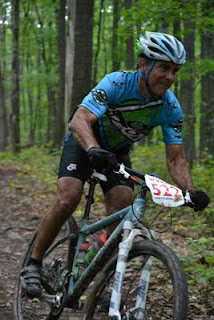 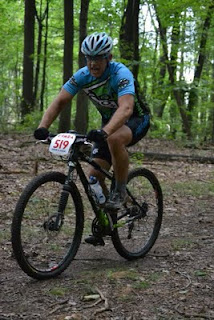 ---------------
Kirk Writes:
The weather was great with partial clouds and temperatures in the low 70’s for the noon start. This race is put on by Gunnar and Betsy Shogren who did a super job at organization.  This was a super race with pizza and pop at the finish. Thanks to Gunnar, Betsy and the rest of their volunteers !

Rich and I both competed in the Men Sport Master (45+) category. The course was fairly fast with some tight single track and a few rocky climbs.  Unfortunately, I had an early spill shortly after our race group funneled into the first trail section.

This was my first “mass start” XC race and I obviously need to work on my ability to ride in a tight group, at speed, over rocky, rooted trails. After picking myself up, I lost about 15 places as I waited for a break in the line of racers to allow me to jump back in.

From there I worked my way back up through the group only to discover that Rich had flatted at about the halfway point. I stopped to give him a “Big Air” canister (he had used up his little CO2 cartridge) and continued. Rich repaid my kindness by passing me a few miles later and giving me a rabbit to chase for several miles!!!

Attached is a pic of the WVMBA flat screen monitor which provides an instantaneous race results status. Very cool. 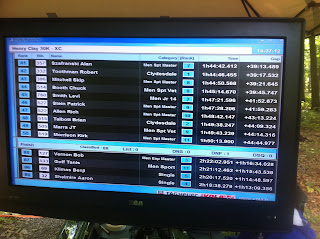 Very cool! Great Pics too! Too bad about your fork breaking Kirk. Looks pretty serious. What kind of bike are you on Richy??