Kirk Morrison and Dan Schar braved the elements to take on the 50 miles of the Morgantown Road Race!

Kirk finished in 6th Place in the Men's 50+ race

Here is the story written by Kirk Morrison.
--------------
I enjoyed racing this past Saturday (April 2nd) in the ABRA Morgantown RR (50 miles). JR and his volunteers put on a great event. The race organization, support, field marshalling and officiating were all excellent. The weather even cooperated …… eventually.

Dan Schar and I started in the same group with him in the Masters 40+ age group and me in the Masters 50+. The weather was awful with rain/sleet on the entire drive down to Morgantown. The start ended up being delayed when a heavy band of snow came through just prior to the scheduled 12 noon start time.  Just look at the size of the falling snowflake in the image below! 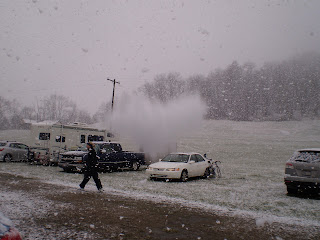 Photo by Kirk Morrison
The 30 min delay was a good decision since visibility was very poor in the heavy snow. With the cold temps (35F), rain, sleet and now …. snow many racers packed up and left at this point. Fortunately, the snow passed and we started in a light drizzle.
With this as my first race of 2011 my goal was simply to stay with the Masters lead group for the first 21 miles which covered a rolling route north to Waynesburg, PA. I was pleased that I was able to hang with the fast guys as we averaged almost 22 mph on this first leg.

Dan was in an excellent position during this first leg as it appeared (from the view at the back) that he was riding smartly in the front group of the peloton. 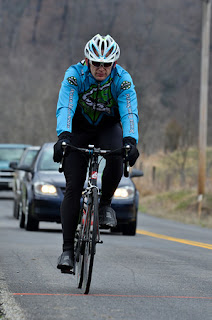 As we approached Waynesburg I was feeling OK so I decided to try to take a sprint off the front of the group to try to get a gap on the field. 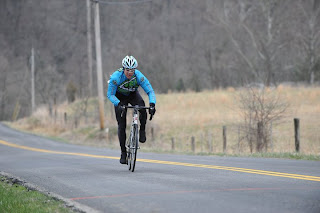 Photo by West Liberty Cycles
Unfortunately, I wasn’t able to shake the main group and simply ended up giving them a spirited lead before falling off the back. Not surprisingly, I was dropped as the group accelerated on the big climbs after Waynesboro. This left me with a 28 mile solo effort over the 4 major climbs of this race. 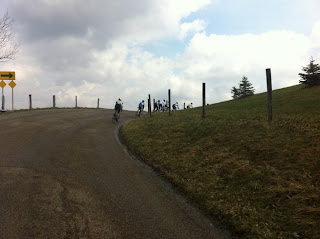 Photo by Ryan Post
By this point the rain had stopped and many of the roads were even dry!  I ended up with a 6th place finish in the Masters 50+ age group. One place short of the podium ! Overall, I was pleased with this first race of the season.
Posted by Henry Dimmick