Kirk Morrison soloed into Morgantown West Virginia for the WVU Criterium, finishing in 2nd Place of the Masters 50+ race.

I raced on Saturday in the Mountaineer Classic Criterium in Clarksburg, WV in the Masters 50+ group. Our race was combined with the 40+ racers and our total field was about a dozen. This was a 0.6 mile loop through downtown Clarksburg and the race was put on by the WVU Cycling Team. This was my first downtown Crit and I was looking to get one of these under my belt before next weekend's Steel City Showdown.

Our race was the last (starting at 5:10pm) so the crowds were thinning as the racing from the larger classes had finished. After a few spinning laps to start the race I decided to get things started by taking a flyer off the front. Unfortunately, I had company since Bob Gottlieb caught my wheel.Evidently, Bob is a marked man since the entire pack mounted a chase to bring us back in. The subsequent attacks ended up dropping me from the back of the group so I ended up spending the rest of the race with chase groups trying to catch back on. 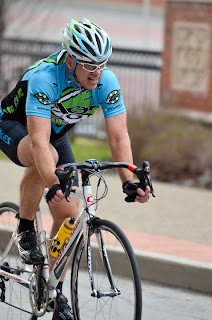 Photo by Fred Jordan
Based on the finish, the pack was right since Bob ended up winning the race for the combined group. I was fortunate that no other 50+ racers were able to stay with the pack so I ended up with 2nd place in the 50+ group. The 3rd place rider from our group was back a bit since I ended up lapping him before the race was over.A well run fun event ! Kudo's to the WVU Cycling Team for doing such a nice job.
Posted by Henry Dimmick