While the rest of us (coasted) into the off season, Kirk Morrison stayed on the GAS with a focus on the 2012 Master's World Championships being held in Louisville , Kentucky. 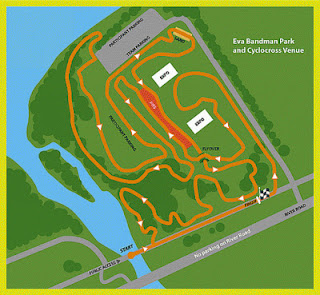 Here is a (Thursday) Race Report from Kirk, direct from Louisville!
-------------------------------
Today was the 1st day of racing at the UCI Masters Cyclocross World Championships and the event was kicked-off by my age group (50-54). Our group was scheduled to race 2 “heats” to determine the placings for the Championship race on Saturday morning. The course conditions had deteriorated considerably since my pre-ride on Weds morning. The 1.5” of rain over the last 24 hours turned the flat sections into 2 to 3” mud so even these have slowed considerably. Conditions at race time were 40 degrees, a moderate breeze and a light rain. The course includes 2 sand pits, a staired bridge over the course (with a steep downhill), a set of barriers followed by a definite run-up and a single section containing about 5 steep “ups and downs” that are impossible to ride (with the slick conditions). Everyone is running !

The start order was determined by random draw and I ended up in 31st position (out of 35 starters). Ours was the first heats of the day with heat 1 starting at 9:30am and my group (heat 2) scheduled for a 10:10am start. However, based on the slow lap times from the mud (3 laps were scheduled) my heat started almost 15 minutes late. As a side note, all of the subsequent heats for the day were reduced to 2 laps.

I experienced some mechanicals early in the race as a rear brake pad kept slipping inside my wheel. These required some stops to repair at inconvenient times. The alignment looked OK but the slick mud must have provided enough lubrication to allow the pad to slip to the inside. A lap later I was able to switch bikes which fixed this problem.

I was able to pass a few racers and ended up in 30th place. I would have liked a better result but was happy that I didn’t get lapped (!).

Note: I see that the results see me finishing 1 lap down. In reality, I wasn’t lapped or pulled (and I rode the entire 3 laps). I believe that the finish line officials just stopped recording our finishes since they had started the next heat before we came across the finish line. Oh well …….

Next up is the finals on Sat at 11:20am. The conditions could be totally different since the temps are dropping and it’s snowing (as I write). Tonight we are under a winter weather advisory with 40mph winds forecast and low temps of 24F. Things stay cold and windy on Friday and low temps for Fri night are forecast at 21F so we may have more frozen ground (which could be an improvement …….. as long as there’s not too much ice).

Tomorrow I’ll plan to spectate and perhaps help “pit” for Todd (M35-39 - heats) and Steevo (M30-34 - Final). The UCI officials have been very helpful and reasonable. Disappointingly, my name didn’t come up on the “post race drug testing list” that was posted after the race.
Posted by Henry Dimmick

Nice coverage! Too bad about the conditions, but I guess that's what cyclocross in January is all about.